How to EQ Electric Guitar – Simple Step By Step Guide 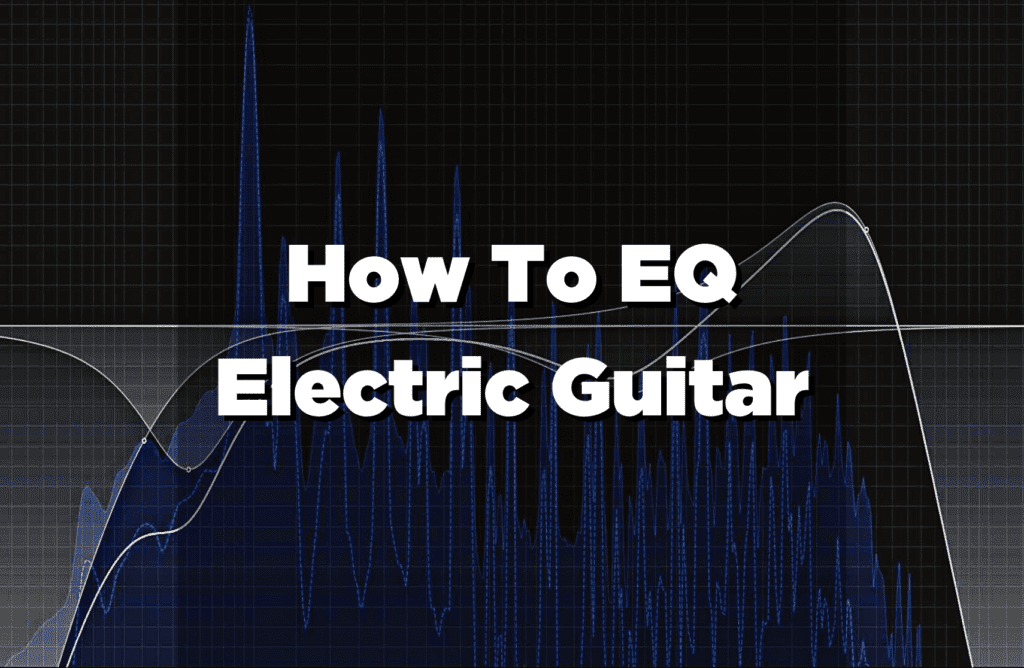 An electric guitar’s huge dynamic range can be a mix engineer’s worst nightmare. That being said, it can also easily help “fill in” any gaps you might have in the mix quite easily. When mixed appropriately, a single guitar channel can help you fill up almost the entire spectrum, mud-free and without any artificial noises. Whether you’re using samples or recorded the guitar by yourself, the process is relatively similar. Although sound samples are probably already treated to some degree, it’s always better to work with your ears. So load up your favorite EQ and let’s learn how to EQ electric guitar.

A few things before we start. I’m purposely avoiding genre, mic type, amp, whether it’s overdriven, crunch, clean, or which other effects are recorded with guitar. I want you to understand how to hear the frequencies that you want to cut out. Use this guide as a base, but make adjustments to fit the song or track you’re working on.

The following tips will help you clean up your electric guitar sound using a parametric EQ (equalizer) and other standard effects. For each frequency in the EQ, you’ll use these settings:

I wrote this tutorial with mixing in mind (with the EQ and effects coming after the amp in the chain), so don’t expect your pedal to do the job. In this tutorial, I’ll be using Slice EQ by Kilohearts, but feel free to use any EQ you like.

1. Roll-off The Lows More Than You Think You Need To

Usually between 100 and 150hz. You can use a combination of a high-pass and low shelf for this, as well as a peak with a Q of 1.0 at 100hz, which by cutting 2-6dB or so will reduce the fundamental sounds of the guitar and let the rest of the tone through more clearly. For a high-pass, I usually use a Q of 0.7 to 1.4. The lower the Q, the more aggressive the high-pass, but coupled with a lower frequency setting, you can get a slightly fuller sound without the mud, sometimes. Or you can choose a higher frequency with a Q of 1.4 to attempt the same. To me, this is the most important part of EQing a guitar, because it allows it to interact with the bass part rather than fight it.

But not too much, using a Q of 1.0. When you dip or boost frequencies, use the peak setting, and turn the gain down or up, respectively. Taking out too much in this area will result in what is called a “scooped” sound and will sound very lifeless.

See also  How to Compress Bass Guitar? A Complete Guide for Bass Compression

But if there’s some bite and presence in there, you’ll want to boost a bit. To roll off highs, you want to use a high-shelf, or to be more aggressive, use a low-pass. I typically use a low-pass with a Q of 1.4, which actually boosts the frequency a little bit, but there are no hard and fast rules.

We all know that sometimes effects add a lot, but even a simple reverb can add so much mud, it just isn’t worth it. So here are some tips for other effects that with some adjustments, will sit well, even in a crowded mix.

If you use delay or reverb for a more lush sound (and not a deliberate effect), don’t overdo it. The second you hear the difference, stop turning it up. To reduce muddiness, use a pre-delay on the reverb between 20-40ms. You’ll hear the distinction on the guitar improve as you move it further back. Once you hear a “slap-back” though, you’ve gone too far. Both reverb and delay should be on their own bus, with an EQ in front that aggressively rolls off the lows and less aggressively rolls off the highs. This will allow you to use more reverb without mud or metallic-sounding artifacts. Here, too, I usually use Kilohearts‘ plugins, even though any delay or reverb you like will work.

Use Compression With Care.

If you have a big, distorted sound already, then it is probably already compressed pretty good. If you apply too much compression, you’ll make the guitar sound small and anemic. Give it some attack, and watch your release times so you don’t cut off the next note. Watch your gain reduction too. If you let in the lows too much, it will pump the compressor. Remember that the release times depend on when the compressor stops compressing, or when your gain reduction meter reads zero. Adjust it so that you aren’t cutting off the next beat but also so that it doesn’t “pump”, or raise the volume on the tail end of the note noticeably.

So this is how to EQ and apply some basic effects to electric guitar. This wasn’t intended to be an exact fit for every production or mix. I use this as a starting point and adjust according to the mix and the role the guitar part plays in it. I’d advise you to experiment and try different things. I’m pretty sure that even some ring modulation can make (some sort of) sense in some contexts.

If you have more suggestions, feel free to post them in the comments below. And If you liked it, you should take a look at the recording and mixing section for more articles such as this one.

Here’s a great video by Steven from Neural DSP, showing his method of EQing electric guitars. Our methods are very different because our mix philosophy is different. He’s more of a surgeon, and I’m more of a butcher. He will hunt a frequency that bothers him while I’ll usually sut, and then make up for what I’m lacking. There’s not right and wrong, and that’s exactly the reason I’m sharing a method so different than mine. Enjoy!

Guitar Effects Pedals: How to Buy and What to Skip