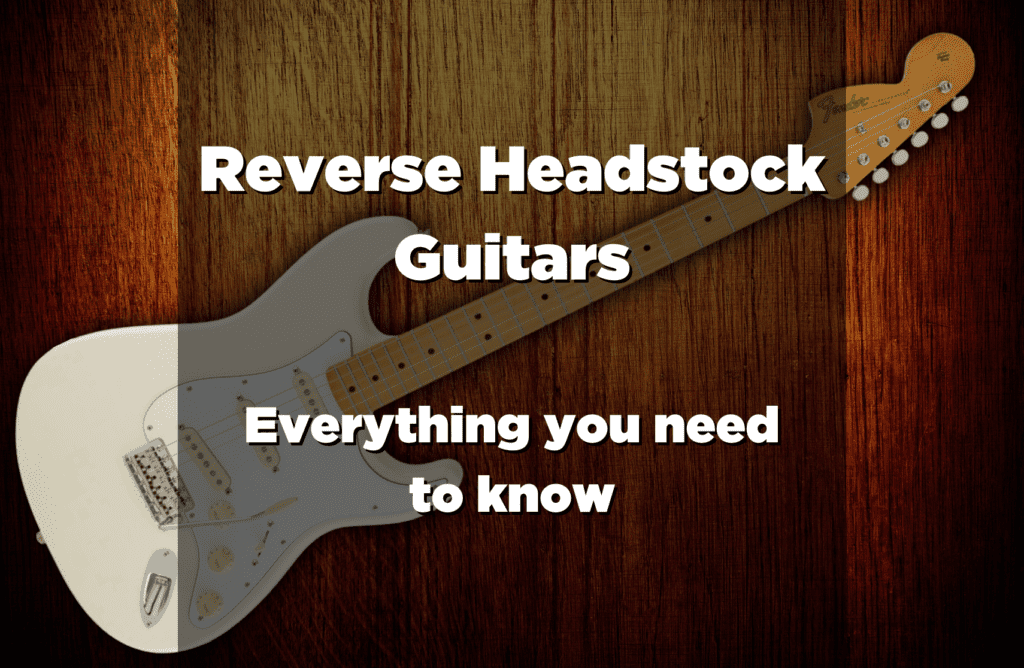 When buying or making a new guitar, you make a choice regarding its headstock. A headstock is an important component of the instrument. It does not only serve as a support for the tuners but also affects the overall sound. There are several ways to construct a headstock. Choosing the right one naturally makes a difference in the aesthetics and performance of the guitar.

One of the varieties of guitar in terms of the headstock is the reverse headstock. While they are not so popular among guitarists, a lot of players are obsessed with this kind of instrument for its unique feel and advantages as opposed to the conventional headstock. In this guide, let us try to learn more about reverse headstock guitars.

A guitar with a standard headstock has a tuner near the player at the shortest distance from the bridge. On the other hand, a reverse headstock, as suggested by the name, is reversed from an in-line tuner set. It’s different in such a way that the low E string is the longest string. Such a construction increases the string tension in the low strings to allow the lower tuning to not flab out, and the higher strings can be easily played.

The reverse headstock has some amazing benefits over conventional headstocks. On a six-in-line standard headstock, the top ‘e’ is longer than the bottom ‘E’. As longer strings need more tension to tune to pitch, the ‘e’ is in maximum tension. For a reverse headstock, thinner strings are shorter. It causes them to require less tension which means it is easier to bend and hold down the chords.

Strat-style guitars fitted with reverse headstocks are quite easier to play than standard ones. Short-scale guitars also have advantages with reverse headstocks. When the same gauge strings are used, a 24-inch scale obviously has a lower tension than a 25.5-inch scale. Using 9-42 on a 25.5-inch scale is good, but it can cause rattles on the thicker strings of the 24-inch scale because of the lower tension. This is why you would fit 10-46 gauge to compensate for it.

However, using a reverse headstock means you can stay with the 9-42 gauge because the thicker strings will be under higher tension as they are longer and there is less possibility of flapping. A reverse headstock strat guitar is also more ergonomic and more convenient to play. As your hand is already on the treble side of the neck, you just need to move it down the headstock and you are on the same side as the tuners.

How To String A Reverse Headstock Guitar?

When it comes to stringing a reverse headstock guitar, the order of the strings really doesn’t matter but it is advisable to start with the low E. On a standard headstock, one would generally go on the high strings between the second and the third tuner away from the nut. However, for a reverse headstock, it should get wound in an opposite direction. This means if you are right-handed, the string should be wound clockwise around the post.

In general, the string should always come off the tuning post on the farthest side from the peghead edge. Changing strings is somewhat more complicated for a reverse headstock guitar. You need to reach over the headstock with the left hand to turn the tuning keys.

Reverse Headstock Vs Standard Headstock – How They Differ?

The primary difference between a standard headstock and a reverse headstock is the change in the way strings bend relative to one another. When the high ‘e’ string is bent sideways on a standard headstock, a part of it stretches the length of the chord between the nut and the peg, reducing the overall bend effect. On the other hand, a reverse headstock has a higher pitch because less string is stretched between the nut and the peg.

This implies that the low ‘e’ is bendy for a standard headstock while it is more solid and stable on a reverse headstock. It is easier to pick and fret hard without putting off the tuning. When it comes to a strat, the headstock makes a difference in the way chords are bent. For a standard headstock, the lower strings bend more than the higher strings, so the chords go out of tune as they are bent. With a reverse headstock, the strings bend in tune and also provide better tuning stability.

How to Play Guitar Scales Easily