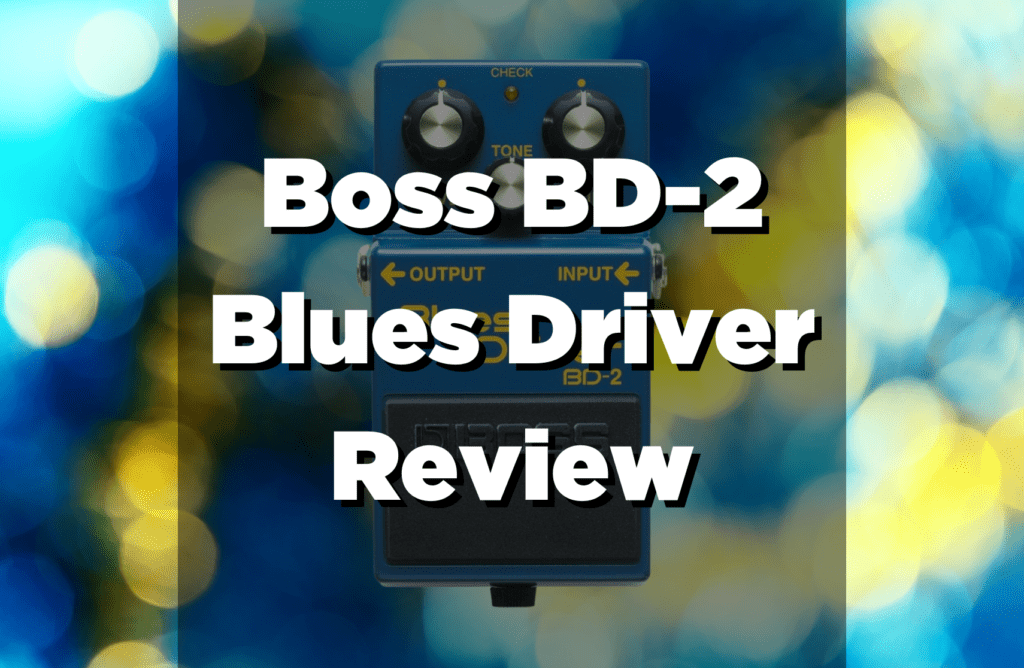 Boss is probably the most well-known maker of guitar effects in the entire world. This is because of their insane line of well-produced and super successful pedals. They are very good at mass-producing effects while keeping the quality and sound at a high level, yet, affordable. And Boss Blues Driver (or Boss BD-2) is no different.

What is Boss Blues Driver BD-2?

The BD-2 or Blues Driver by Boss is one of its most successful pedals. It is an overdrive pedal designed to give light distortion to your guitar tone. Overdrive pedals are more subtle than distortion pedals or fuzz boxes. The Blues Driver was specifically designed to be used for blues music. Particularly for playing the trebly, thin blues leads that the BD-2 does so well.

What is special about this effect?

The BD-2 is a pedal that has been used by many different guitarists over the years, not just blues musicians. Most pedals on the market tend to go too heavy on distortion, but the Blues Driver (along with its main competitor, the Ibanez Tube Screamer), is an example of a light touch on tone distortion. This makes for a great level of control for guitarists, especially in live situations.

With an overdrive pedal like the Blues Driver, guitarists can distort their tone in stages, using this overdrive as stage one. Then, they can use a distortion pedal on top of it, such as OS-2, for example, to move their tone into a more advanced stage of distortion. This stacking technique is very popular for the BD-2. This is the reason so many guitarists use it as the first effect in their chain.

Why Get the Blues Driver?

If you are a guitarist who plays either blues or rock, this pedal is definitely worth your time and money. It cannot give you the full-on distortion that other pedals can, but what it can give is a natural-sounding overdriven amp tone. The pedal has knobs for gain, volume, and tone, so it can be easily used as a volume boost or for a change of tone during solos. With so many options, this pedal really is worth its weight in gold.

Here are a few sound examples of it, showing off some of the most familiar sounds the BD-2 can create

How Much Does it Cost?

Boss Blues Driver BD-2 is one of the most cost-effective pedals out there. But it’s not just ‘cost-effective’ – it’s a great pedal, no matter which pedal you put it head-to-head against. And on top of that, It’s one of the cheapest in the category. If you’re on the fence, don’t be. This is a great pedal, and it will fit most styles of playing. I feel very comfortable recommending it.

What’s the Difference Between Distortion and Overdrive?

Ohm Picks – Everything You Should Know (Full Review)