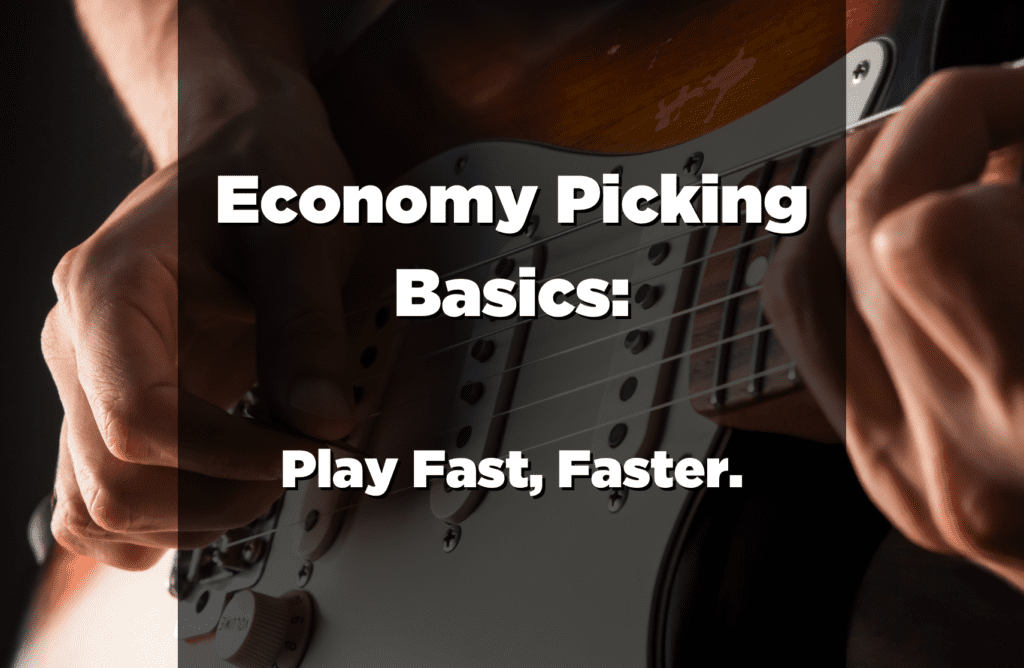 Economy picking is a very important skill to possess as a guitarist and will help you increase your speed dramatically. Used by almost every virtuoso player out there, economy picking is a common-sense way to eliminate wasted motion on scales and progressions, particularly on 3 note-per-string shapes.

However, it is not easy; in fact, the longer you have played guitar, the harder it will be for you to master. Economy picking is a prime example of that old cliche your mom used to throw at you over and over: easier said than done.

What Is Economy Picking

Conceptually, it is very simple. Whereas standard alternate picking uses a continuous up-down picking motion (pick upwards, then downwards, then upwards, etc.), This picking technique eliminates the wasted motion when playing 3 notes per string progressions. When playing a typical 3 note per string scale using standard alternate picking, you are usually used to picking down, up, down, and then UP… However, for that final up pick, you actually have to skip OVER the string and pluck the note on the way back. Obviously, this technique is situational, it is not applicable to every scale. However, you will be surprised how quickly your 3-note-per string scales start to improve.

With economy picking, we try to eliminate the extra motion and be as technically correct as possible. So, to economy pick a three-note-per string progression, we would use the following motion: Down, up, down; down, up, down (and so on for each respective string). Like I said, conceptually, it is very simple. It’s putting it in practice that’s the hard part. With persistence, however, benefits are immediately noticeable. In fact, in my opinion, economy picking feels MORE NATURAL than standard alternate picking or tremolo picking.

However, the good news is that all 7 modes come in sweeping (economy) picking patterns; these are 3-note-per-string progressions for every position of the major modal scale. Practicing these modes using economy sweeping will be a steadily rewarding exercise: not only will you gain speed and accuracy, but you will also strengthen your knowledge of modal theory.

Economy picking is all about timing. When first practicing, your notes will be uneven, even resembling triplets. This is often hard for the guitarist practicing to hear these inconsistencies in timing. There is one simple cure for this… Practice with a metronome. I’ll say it one more time: practice with a metronome. We have an article written just about this topic, you can find it here.

How to Master Fingerpicking With 5 Simple Tips