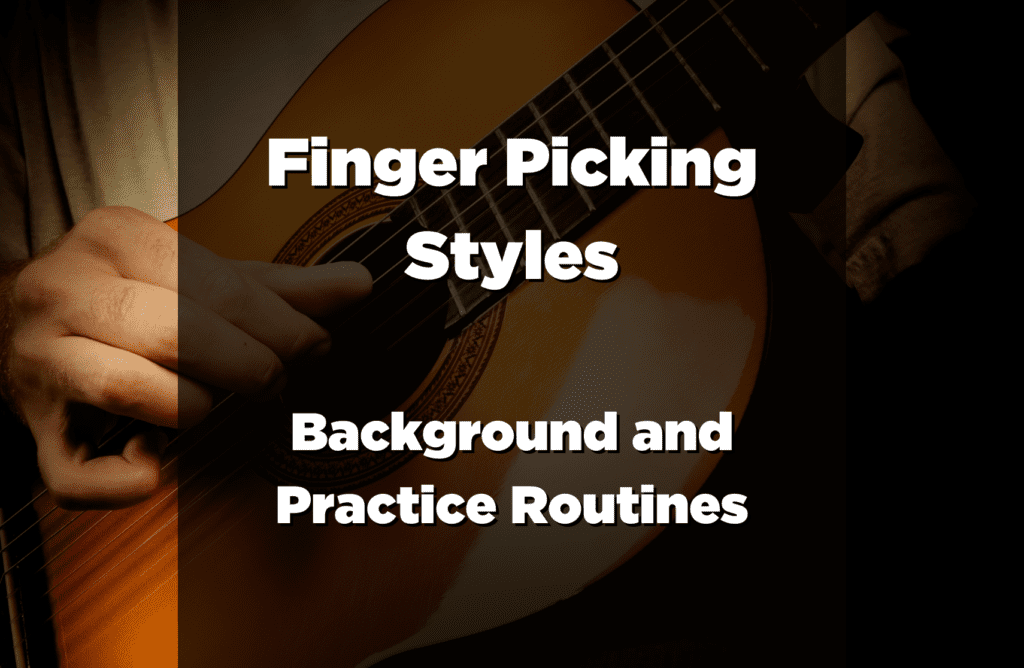 I want to start by addressing the obvious: This is a guitar pick blog, I know.. But I’m also a big believer in learning different skills and having as many tools in your arsenal as possible. For that matter, this is just another skill you’ll be able to use (and it’s quite simple too). So if you’re a big pick fan, this is for you (and it’s also a great reason to give fingerpicks a try). And if you’re already a fingerpicking master, you might want to browse through our guitar playing tips section, as it features a lot of tricks you can learn.

Travis picking was named after Merle Travis who brought the style to light during the forties and fifties. This guitar style goes back even further to the twenties when Blind Blake and Lonnie Johnson were trying to imitate popular piano rags with a guitar. To achieve this guitarists played the melody with their fingers while providing the accompaniment with their thumb. Playing like this allowed the guitarist to duplicate the syncopation of pianists.

Syncopation on a Guitar

Syncopation occurs when the strong notes or the melody get off the normal beat or rhythm. If you were counting upbeats and downbeats in an alternating fashion, and then counted halfway between an upbeat and downbeat, that count would be a syncopated beat. Syncopation is the heart of Travis beating so it is important to practice counting and playing syncopated notes and rhythms.

See also  How to Improve Your Rhythm when Playing Guitar

Travis picking can accompany many kinds of songs, if you vary the bass notes, you can tailor the accompaniment to fit your personal preferences.

Country music actually originated from songs that were sung in England, Scotland, and Ireland. The role of the guitar in these songs was to accompany and not to lead.

Many folk and country songs are based on a simple accompaniment pattern. It combines picking and strumming by plucking a low note first, and then strumming across the three highest strings. Variety is added by alternating the low notes, usually the fifth and sixth strings. The sound that is produced is a high-low pattern which is often called the boom-chick strum.

Try a Country Accompaniment Pattern:
Get your guitar out and try playing this pattern on a C chord. First, pluck the fifth string bass note with your thumb and use the backside of your fingernail to strum down on the three highest notes. Next, pluck the fourth string with your thumb and strum the three highest notes again with your fingernail. Now go back to plucking the fifth string followed by a strum and repeat the pattern. Practice this until it becomes comfortable and then try doing it with some other chords like an Am or an E. Usually, you pluck the root of the chord first and then move to a higher note for the second pluck but you can switch it up to fit your needs.

There are many different techniques of fingerpicking. There is Travis Style picking, off-beat, straight fingerpicking, and arpeggio picking. Two forms are described below.

To play the straight finger technique, rest the thumb of your right hand on the sixth (low E) string and rest the index, middle, and ring fingers on the first, second, and third strings. (The thinnest string is the first or high E string). Keep your wrist, fingers, and hand relaxed. Form a triangle between the thumb, index fingers, and strings. That is all there is to straight fingerpicking.

To Arpeggio pick, play a C chord, one note at a time, starting from the bass note (in this case, C on the A string) and move upward. Rest your thumb on the bass note of the chord, the index finger on the third (G) string, the middle finger on the second (B) string, and the ring finger on the first high (E) string. Pluck the A string with your thumb. Pluck the other strings with your fingers in sequence gradually getting faster and faster. Try to establish a 1-2-3-4 pattern with the main beat on one. This is called arpeggio fingerpicking.

There are several ways to fingerpick. When you first begin, you should start off slowly and gradually get faster with practice. This is the only way to learn the patterns in your head. It is a good idea to learn one style of fingerpicking at a time. Once you master one form, you can move to learn another form. Successful fingerpicking takes a lot of time, patience, and practice. So, do not give up learning it no matter how discouraged you may become.

Some sample measures to get you started with Fingerpicking:

Play a G chord as you learn this fingerpicking pattern. Now you’re using all six strings. This is when it really pays to have three finger picks.