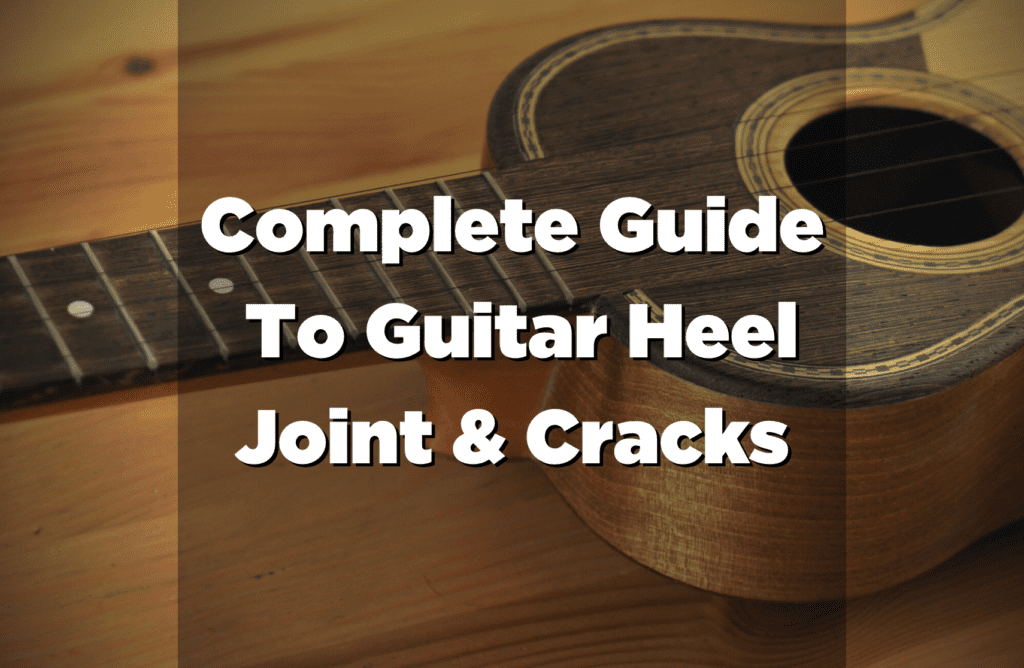 Casual players not interested in taking care of their instrument’s maintenance don’t need to understand the anatomy of the guitar. However, if you are an advanced guitarist curious about how your instrument works and want to be able to make upgrades and modifications, you must know your guitar’s construction in detail.

In this guide, let us learn about the guitar heel, its significance, and variances as well as other intricacies associated with this important component.

The making of a guitar is generally a complex process and is often done by hand. To simplify the process, the neck and body of the guitar are made separately and later attached together. However, the guitar is always under a high amount of pressure due to the tension of the strings. It means that it needs support at the point where the neck and the body meet. This component of the guitar is called the Heel and it plays an important role in providing stability and support at the weakest point in the structure.

Guitar heel not only adds tuning stability between the neck and the body but the type of heel used also makes a difference. This choice often comes down to the guitarist’s general taste, environment, budget, and tone preference. For example, glued heels are not easy to replace but deliver a rich tone ideal for the studio. On the other hand, bolted heels facilitate replacing the neck whenever damaged or broken. This makes the guitars perfect for gigging.

See also  Blackstar HT-5 Guitar Amp: How to Get the Best Results from Your HT-5

Talking about the guitar construction methodologies, there is a distinction based on the ways the neck and the body are attached together. As the classical guitars known today originate from Spain, the neck-body connection they feature is called ‘Spanish’. In this construction, the neck penetrates far into the body in such a way that the two pieces become virtually one. While this is a more complicated and precise method, the sounds these guitars produce are often superior. Owing to the resonance of the connected neck and body.

The German construction method is quite simpler as the neck and body are constructed separately and then connected together. The Spanish heel system is much more time-consuming which is why these guitars are more expensive. They are also a lot better than their cheaper counterparts. With this type of heel joint, the vibration does not get interrupted and there are no or hardly any audible nodes. Another benefit is that the material of the connection can be kept really small. This means the head block of a dovetail or other type of joint is heavier as compared to that of a Spanish heel joint.

The Spanish heel neck joint is known to be a high-end guitar construction. It is far more complex as compared to a glued neck but has amazing sonic benefits. When you look at the soundhole of a classical guitar, you can see a block of wood at the upper end on the inside of its body. If it is a Spanish type of heel joint, the woodblock you see is the same as the neck itself.

See also  Guitar Maintenance: How to Properly Maintain Your Guitar

When a Spanish neck-style guitar is being constructed, the neck and the headblock are made out of a single piece of wood. The neck of the guitar is, in this case, the first thing to be carved. The headblock is either L or U-shaped and is present at the bottom of the neck. The headblock is first glued and then the body is built around it. It’s done by fitting the sides into the slots on the block. The slots are not too deep, just that about 70 percent of the wood of the neck goes into the body.

It is easy to understand the obvious benefits of Spanish heel neck joint over set-neck joints like dovetail, or tenon and mortise. The resulting construction gives a highly robust neck mounting as the whole body of the guitar is built around it. It is much better than guitars using a joining system to connect the body to the neck. It adds a lot of durability and stability to the instrument. This is why famous Spanish brands adopt this method for their guitar construction.

The guitar neck is the component located between the body and the headstock and can be made out of a different material than the fretboard. The type of wood used for the guitar neck is one of the defining factors for the guitar characteristics. It influences the aesthetics, playability, and tone of your instrument to a great extent. The wood type builds the foundation for the guitar’s tone and sound. For example, some woods give your guitar a mellow sound while others make it brighter.

See also  How Long Do Guitar Picks Last, And How To Make Them Last Longer?

Here are some of the most commonly used guitar neck wood types.

One of the most popular materials for guitar necks. Rosewood is known for its ability to mute overtones and smoothen the high frequencies which can otherwise get in the way. It also improves the sustain to add to the brightness.

A dense wood that adds to the neck stability and reduces the risk of warping, mahogany has a grainy appearance that helps compress the sound by absorbing the vibration. It is quite popular for its ability to produce a big/fat sound output that seems smooth.

A tonewood with the highest density, maple makes the guitar neck strong and hard, delivering great stability and sustain. Maple has a uniform grain and is smoother than mahogany which creates a thinner-sounding brightness suitable for a bolt-on neck.

This type of wood has a great combination of warmth and brightness. Koa guitar necks are generally used with Ebony fretboard as they complement one another well.

A black open-grain wood, commonly used for bass guitar necks for its overall warm tone. Wenge is sometimes found on electric guitars as well. When combined with an Ebony fretboard, it creates an overall fuller, bright-sounding tone.

We hope this guide gives you a good understanding of different types of guitar heels and the benefits of Spanish heel neck joints over others. The information should help you choose your guitar neck construction to best suit your preferences.