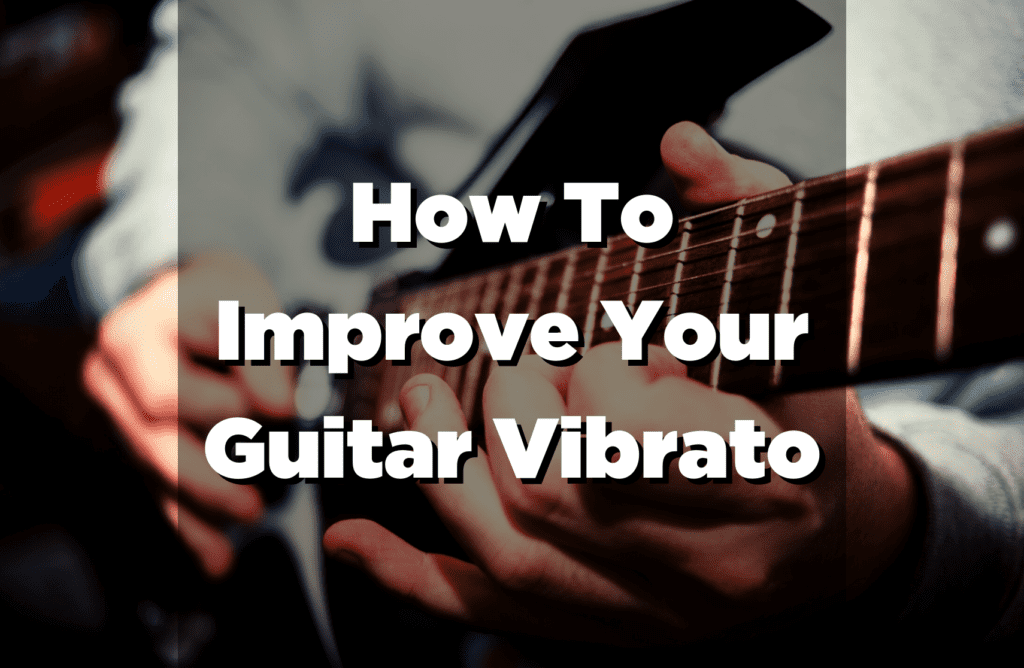 Vibrato is changing the pitch of a note in an undulating fashion to produce a vocal, singing-like quality. A guitar player’s vibrato is extremely important to their overall style and tone. There are many guitar players who have vibratos so distinctive they can simply “shake” one note and their name will immediately enter your mind. In this article, I will not be discussing vibrato produced by a tremolo bar. As that is an entirely different technique, here I am concerned only with finger vibrato.

Yngwie Malmsteen, the Swedish virtuoso, is a guitar player with an immediately recognizable vibrato technique. He usually plays with a wide, operatic style, and in it, you can hear his strong personality and confidence. Joe Satriani, on the other hand, has a quicker vibrato with a somewhat bizarre, science fiction feel to it. Stevie Ray Vaughan’s vibrato is somewhere in the middle of those two ranges and totally packed with the soul of real blues.

The mechanics of good vibrato are relatively simple. But to develop your own style, to put your own “brand” on shaken notes, it will require many hours of practice and listening to how your vibrato sounds and also consciously thinking about what you are doing when you apply it to notes.

This exercise is using our index finger. The main thing to remember when shaking notes is that the movement should come from your wrist. First, play the G note on your B string at the 8th fret and apply vibrato as you hold the note. Let the movement come from your wrist, pivoting it back and forth. Watch how the string moves as you are playing. You should be bending it upward slightly and then letting it fall back down. Keep your index finger in one position, lock it in place, and move your wrist upward and then down and the note will be shaken in the proper way.

Moving on, using your ring finger, play the F note on the G string at the 10th fret. Then bend it upward so that the G note you played previously is the tone that sounds, and apply some vibrato. Try to make the vibrato of this bent note sound exactly as it would if you were playing it with the index finger on the 8th fret B string as you did before, similar to the common “bend and check” method. Again, let the movement come from your wrist as you anchor your fingers into one position. Practice this bent note quickly, slowly, then WIDE, and try to come up with other variations after those.

Matching The Vibrato To The Song(ish)

If you feel like going a little “out there,” you can try this vibrato exercise. It is sort of impossible to do, but attempting it may have some beneficial aspects. Think of a certain emotion: happiness, anger, jealousy, anxiety, joy, exuberance, hate, love, etc. And while you are practicing your vibrato try to convey those different emotions through the shaken notes.

Yes, it is a little weird to attempt this but just think of it as an advanced exercise or “outside-the-box” way of thinking that may improve your playing in the long run. You could try to play an evil-sounding vibrato, then a soulful vibrato. A chaotic vibrato, any emotion at all, try to capture it with your wrist and fingers while shaking the notes. (The subtler emotions won’t be possible to convey, but you can still attempt them.)

On certain practice sessions, it is a good idea to set aside 15 to 30 minutes of your practice routine to concentrate solely on practicing vibrato. Shaking notes all over the fretboard at different speeds and styles. Don’t forget to hit the extremely high notes up near the 22nd fret and also the lower notes down near the 1st fret.

Paying Attention To Other Players’ Vibratos

When listening to new guitar players that you weren’t familiar with previously, pay attention to their vibrato. Ask yourself if they have a type you would like to have yourself. Ask what they could do to improve their vibrato, ask yourself if theirs is bland or exciting. Or if it adequately succeeds in capturing the particular emotion you think the guitarist is aiming for, or if it displays some aspect of the player’s personality.

Another way to practice vibrato is to set your metronome to a moderate tempo. Then go through one of your favorite scales, such as the B Blues scale. As you play, shake every note for one measure, using every finger of your fretting hand, even your pinky.

Another unusual technique is to apply vibrato by initially moving the finger up, away from the target note. Then going back down toward the floor and bending the string past its original position, so the string is going in different directions and the vibrato is produced as a result. This type is only possible on the middle strings and seems pretty difficult to control. I love this exercise because it improved both my finger control and my pitch recognition.

Also playing with NO VIBRATO AT ALL will convey a certain emotion or emotions. There are many jazz players who play without using any type of vibrato and in my opinion, it is all right to go without it occasionally, but I would never be able to stop using vibrato entirely because It feels too soul-less to me.

Anyway, I hope you enjoyed this post about guitar vibrato. If you have additional questions, feel free to post them in the comment. And if you liked it, you should check out our guitar lessons section.