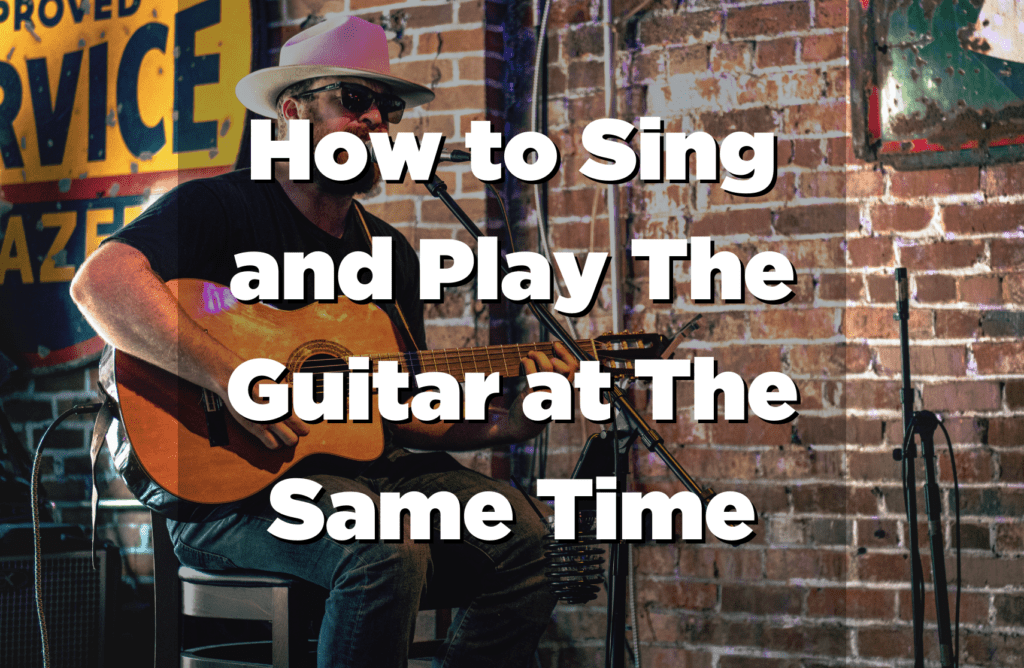 Pop music is filled with guitarists who sing. In fact, it’s so common that a guitarist who doesn’t sing at least a little is kind of a rarity these days. However, a singer-guitarist is playing two instruments at once, and that’s never easy to do, especially when you’re a beginner guitarist. You’ve got to master the art of playing different rhythms against each other, and as a result, a lot of guitarists either play guitar simply or sing simply to avoid messing up. With the right practice, it’s very possible to sing over even the most complicated guitar lines. So without further ado, here’s how to sing and play the guitar at the same time.

It’s not easy, but it’s a lot easier when learned correctly. Here I made you a simple step-by-step guide to learning how to sing while playing the guitar.

Realize that your time is going to need a lot of work if you’re playing two instruments at once, so get ready to work on your time. Buy a metronome or use an online metronome, it doesn’t really matter which one. If you want to buy one, here’s the review I wrote about Korg’s TM-60, and a guide for using a metronome, if you need some help.

Any time you practice singing a song while playing the guitar, you should have your metronome on and clicking, even when you’re still writing a song. This will ingrain a sense of time into your playing so that when the metronome is removed, you’ll sound a whole lot better. It may feel unnatural at first, but you need to simply decide that when you’re practicing, you’ll have a metronome going.

2. Start With a Simple Song

Even if your end goal is to perform The Girl From Ipanema, you have to start with a simpler piece. Find a 2/3/4 chord song, preferably one you already learned.

The guitar part will always be more difficult, at least rhythmically, so it’s the first thing you’ve got to get down. Set the metronome slow, and practice songs until you can play them at a higher-than-average speed almost perfectly. Your goal is to make guitar playing second nature, especially your picking hand so that when you add the vocals in, you won’t have an uphill battle.

4. Hum Before You Sing

Just like you can’t run before you start walking, you should build the foundation of singing while playing the guitar with humming, at least when you’re just starting. Humming includes the basic structure of the song, such as rhythm and melody, but it’s a lot simpler to do on auto-pilot.

I know it’s obvious, but you’d be surprised how many players skip this part. There’s nothing more frustrating than having an almost-perfect run of a song just to have a blackout in the last line.

6. Add in the Singing, But Reduce the Tempo

Set the metronome low again and practice singing with the guitar. Be persistent. If it seems impossible at first, don’t worry; it isn’t. Set the metronome lower and keep trying until you can sing and play at the same time, then gradually increase the tempo. Again, you want to push past the speed at that you perform the song because that way it’ll feel more natural when you go back down to the regular tempo. Always practice with a metronome. Once you’ve got the rhythm of both parts, you can start to work on making the vocals shine, but concentrate on the guitar line until it’s perfect: again, it’s the more difficult part and deserves the most of your attention.

7. Slowly Build Up the Speed

Increase your speed by 5-10% every time you master a tempo. If you can play it to perfection at 70 BPM, try it at 75. Jumping from 60 to 80 BPM will probably make you sound sloppy and will frustrate you instead of building your confidence.

You made it! It probably wasn’t easy, but the more songs you master, the easier it will be to learn new ones. Just as it was with playing the guitar when you just started.

Do you have any other tips for learning to play the guitar while singing? Post in our comments section below.

How To Tie A Luthier’s Knot?

How To Restring An Acoustic Guitar? A Step By Step Guide