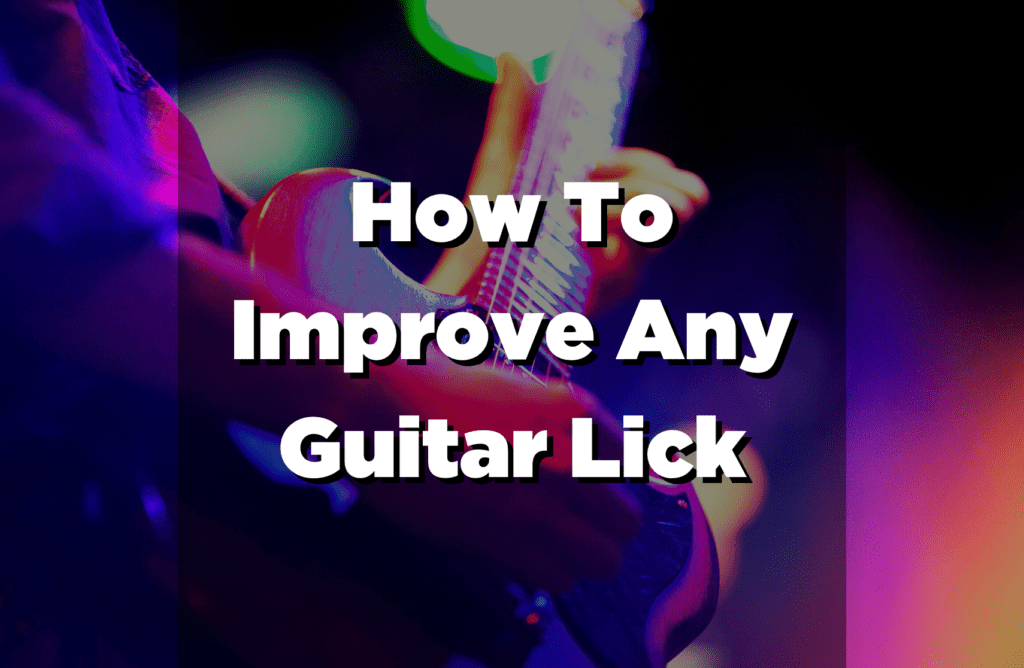 How to improve guitar licks? This is a question every guitar player asks themselves. I know I am. So today I decided to take one of the most over-used, mundane guitar licks of all time, and try to add it some “spice” and excitement.

Heck, most of us have probably played that lick a few (hundred) times ourselves. (I’m guilty.) But many musicians would agree that the lick is much too bland for repeated use. And hence one immediately wonders how the lick could be improved upon, or at least taken to a higher level of sophistication. Or how the phrase might be turned into a finger exercise worthy of attention. All of which would hopefully yield substantially better results.

Well, there is good news. The lick can be improved. Simply by adding one or two notes here and there. There’s nothing to it but to do it.

Yngwie Malmsteen, the awesome Swedish guitar virtuoso, (study his album Marching Out to improve your playing immensely), also got tired of that particular lick and updated it by adding one simple note to turn it into this phrase:

Notice how the basic triplets are still included at the beginning, yet an extra note has been added. The stretch up to the G# (16th fret) may be a little hairy, but is not impossible. I have heard Yngwie play this lick (although in a different key) so quickly that I could barely discern the notes. I recommend practicing it with a metronome and striving for a great degree of speed. But if it gets to sound like a whizzing blur of mush, slow it down just a tad and try to get all the notes to be highly audible, even to a lazy set of eardrums.

See also  The 7 Best Ways to Hold a Guitar Pick

Taking It One Step Further

But let’s not stop there. Let’s go further and add two more notes and turn the lick into a rather difficult finger exercise.

This is my way to improve guitar licks, and it works very well with most of the boring lines you came up with when half-sitting-half-lying on the sofa with an unplugged electric. I hope you enjoyed it, and if you did, check out our guitar lessons section, it’s all free…

When working on this tutorial, I came across this video by Tom Hess, which has one of the most epic beards I’ve even seen in my life. He goes through a few really cool techniques of improving guitar lick that I really recommend you to check out:

How To Tune A Guitar by Ear
How To Learn To Play Guitar By Yourself - 10 Tips For Beginners
The 7 Best Ways to Hold a Guitar Pick
How to Improvise on Guitar - Guide To Guitar Improvisation
guitar lick guitar licks improve guitar licks
Share. Facebook Twitter Pinterest LinkedIn Tumblr WhatsApp Email

How to Clean Guitar Strings – Step by Step + Tips and Tricks