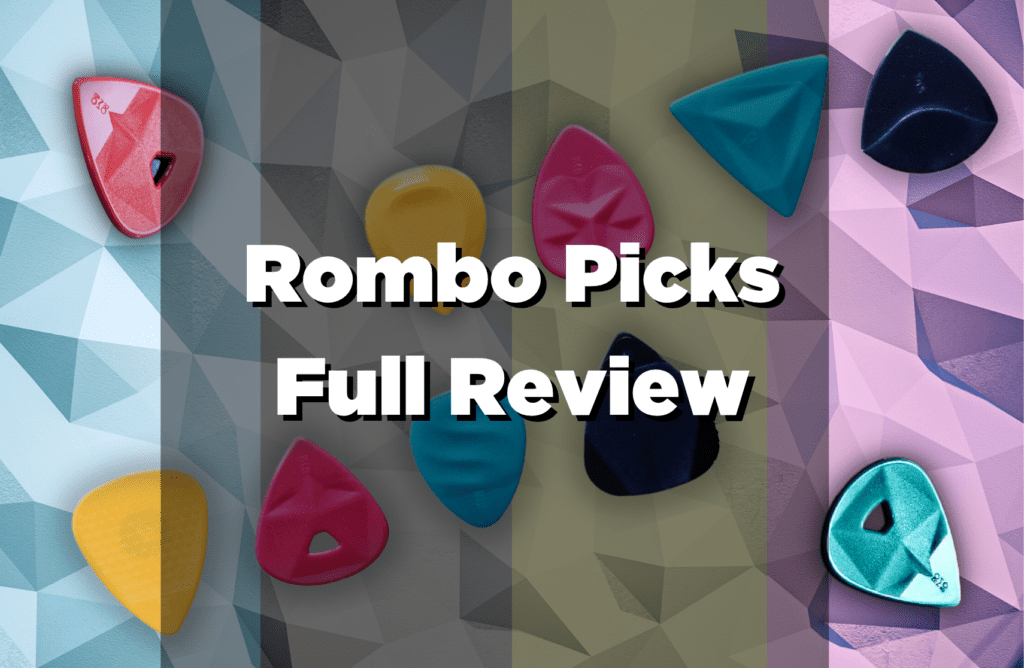 Rombo Picks is run by Carlos Diez Macia and Judith Heindorf in Stuttgart, Germany. They started designing their picks in 2019, and released their first line of four picks (Origami, Waves, Standard, and Diamond) in that same year after a successful Kickstarter campaign. A few months later, they successfully funded the production of another four picks through another Kickstarter campaign. So today they’re manufacturing 8 different picks.

Before we dive into the actual review, I want to share with you a little story. I tried to put my hand on Rombo Picks for months. They stopped shipping to where I live a few years ago because there were a lot of problems with the postal service. I reached out, trying to talk them into giving it a shot, but with no success. Tried contacting dozens of distributors, but no one ships here. I gave it one more shot about two months ago, sent them a message and thankfully, they agreed to send them in order to see whether the shipping time was improved. Unfortunately, it took the picks about a month to get here, so I probably won’t be able to get any of their future designs.

On a happier note, Rombo Picks sent me 2 variety packs: The standard one, and the EcoBlack. So today I’ll review every pick they make, except for Paper Origami.

The problem I’m having with describing them is that there’s so much more to them than just their “dry” specs. Let’s take Jade for example: It’s 2.3mm thick, but it has a small “bump” reaching 3.6mm. This little “bump” may sound insignificant, but in fact, it plays a huge role in its grip and it’s making it a lot more comfortable.

What are Rombo Picks Made Of?

Usually, when I ask a pick maker what are their picks made of, I get a relatively simple answer. It’s either a material or a mix of a few materials that I’m usually familiar with at some level. Not this time, though. See, Judith’s experience includes being a product manager for a company that produces different types of plastics and metals products. This fact made her reply to my question a lot more complicated and interesting. So if you want to geek around with me, keep reading. But if not (which is totally fine), the short answer is that the standard range is made out of some sort of cousin to Nylon, and the EcoBlack range is made out of the same material (99.99%), but due to it being recycled, it requires another step in the production that takes place in a factory in Italy.

The Standard And Paper Origami Picks

Rombo Picks’ standard line is made out of a Polymide (which is the family of materials Nylon belongs to). Part of what makes these pick so durable compared to other Polyamide (Nylon, for example) based picks is the process of injection and material optimization. Rombo Picks’ material was designed and optimized for abrasion (for more durability) and density (for warmer tone). The process includes heating the material to 270-300°C (518-572°F) and then injecting it into the mold through a tiny nozzle, where it’s being cooled down and hardened in its shape. From there, the picks are inspected for minor imperfections, grinded, sanded, and polished by hand.

If you ever read any of my other pick reviews, you know that I appreciate a simplistic design that’s both unique and recognizable. Rombo Picks hit all the points here. These picks are so elegant, they look like they came out of an interior designer’s brochure. I’m a big fan of this style, and you just got to love these colors.

I find the gripping surface a bit slippery, so I appreciate the 3D shape it has. Small details like Jade’s “bump”, Diamond’s hole or Horizon’s arch is what make these picks stand out.

The bevel of every pick is polished to achieve a glossy finish. It helps avoiding picking noise as well as to help the picks glide effortlessly across the strings. I appreciate that they made the transition to the glossy tip as part of the design and not just put it at the end of every pick (Diamond is a good example of that).

A great strumming pick. It’s as flexible as a super-thin Celluloid but far more durable. Being made out of a material that resembles Nylon, it also doesn’t feel like it’s going to break in half, giving me a lot of confidence during aggressive parts.

As mentioned previously, this is, in my opinion, the most useful pick in Rombo Picks’ range. This is really an ace in your sleeve if you need to play many different parts in the same song without changing picks.

One of the very few triangle-shaped picks that I can play comfortably. The tip is 0.8mm thick, making a nice snappy attack, while the gripping area peaks at 2.4mm, making it very comfortable.

A very useful pick. I find it almost as accurate as Diamond and Horizon, but warmer sounding. An interesting thing about it is that its design is stackable. If you have 2 of these, they fit perfectly into each other, and if you’re willing to make the extra effort of offsetting their tips slightly, you can experiment with a whole new dimension of tonal possibilities.

The perfect balance between warmth and brightness. Its super round tip makes it ideal for palm muting power chords or rhythm parts.

In a way, Horizon can be considered a wider version of Diamond, even though each has its own uniqueness. They sound very similar and I tend to use them in similar situations. I don’t really care for that width, but it’s a matter of personal taste.

My personal favorite. Bright sounding and very accurate pick. Resembles the Jazz III, but is a lot more comfortable.

The thickest of them all, and the one with the simplest design. It’s a lot warmer than I expected it to be, making it my favorite sounding pick. I ended up favoring Diamond over it only because I found it more comfortable.

What I Would’ve Loved To See In Their Line?

I would’ve loved to see a version without the polished bevel. I’m really into as much texture as a guitar pick can have, and a rough tip can add a lot of variety to their range. In terms of variety packs, I think it could’ve been nice to have 2 different variety packs for thinner or thicker gauge picks.

Where Can You Buy Rombo Picks From?

Rombo Picks are available through their website, any one of their dozens of distributors, and through the Heavy Repping store.

I honestly thought that being the thickest, Jade would be my favorite pick. To my surprise, Diamond feels a lot more natural to me. It also feels a lot tougher than it is, giving that zero-flexibility vibe, where in fact, it’s almost as flexible as a Jazz III. That being said, I feel like Origami is the most versatile pick I ever tried. It won’t be as good as Diamond for your solos, not as good as Classic for strumming, or as good as Waves for power chord palm muting. But it can definitely do all of these things, making it the most useful pick in the range.

I get the impression that this range was designed to cover any style, need, and scenario. And that’s exactly what it does. Another thing is their attention to details. The tiny logo they add to each pick both looks very nice, but more importantly, shows how accurate their mold injection process is. I feel like each of these picks was inspected to make sure it looks and feels as they planned it to be.

I tend to take my time with reviews. I spent more than a month abusing these picks before I even started writing anything. Through the entire 1+ months process of checking these picks out, I didn’t once find myself playing something that required something Rombo Picks couldn’t deliver. So, that’s a good set to take to an island. That being said, I found myself, again and again, reaching out to grab Diamond, even if it didn’t fit what I played. I love this pick because it’s comfortable, it’s a perfect size, and it’s got tons of character.

The price may sound a bit steep, but when taking the comfort and superb durability against most other comparable picks into account, Rombo Picks is a clear winner.

The two variety packs I got from Rombo Picks were sent to me for free. It, however, didn’t change the way I wrote about them, nor the final score I gave them.

What can I say? Rombo Picks just hit all the marks with their variety pack. There's absolutely nothing at least one of these picks can't do. They sound great, consistent, comfortable, and durable. The grip is a bit odd (at least for me) at first, but I got used to it after some playing, and they are priced very reasonably.