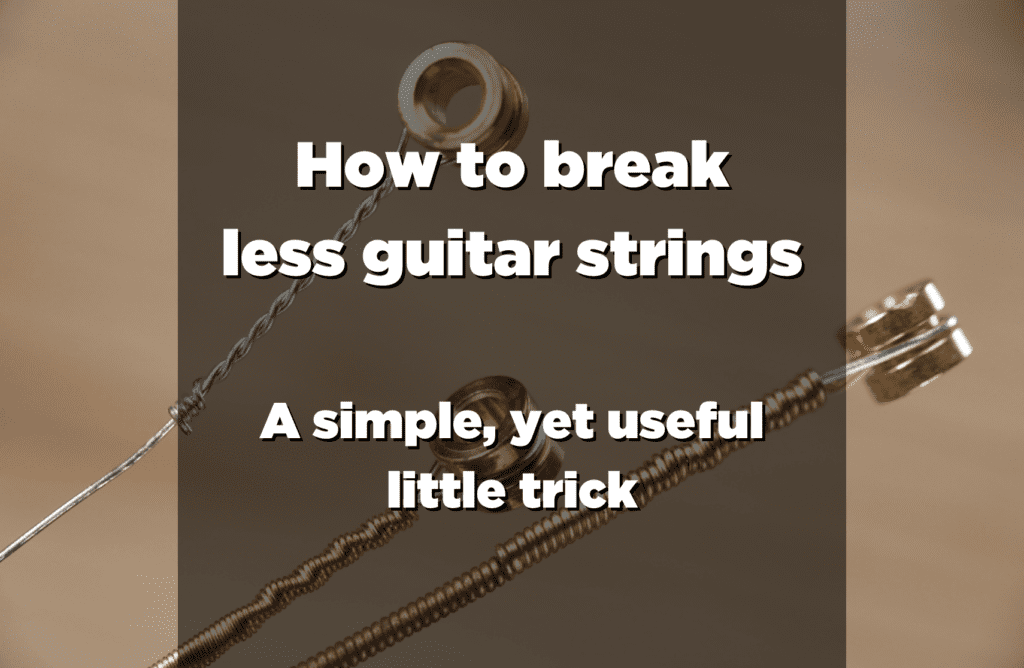 I’m a huge lover of Tune-O-Matic bridges. They are stable, reliable and they are the most gorgeous bridges you’ll ever see on a guitar. But they tend to break strings really fast. Years ago while jamming with a friend, who is a huge Gibson guitar fan, I broke a guitar string. he showed me how he strung up his guitars. By simply inserting the string from the opposite side of the bridge, and wrapping the guitar strings over top of the bridge it reduced the angle that the string normally sat at.

When strung the standard way the strings sit at about a thirty five to forty five degree angle. It’s creating a strain on the metal in the string which leads to breakage after heavy use. By stringing from the opposite side (as pictured) and wrapping the string over the bridge you reduce the problem of a sharp angle on the strings. Thus extending the life of the strings and adding a little more sustain to the guitar’s sound.

As any guitar player will tell you, strings breaking can be costly. They can also be time consuming. Especially when playing live on stage, and during studio recording sessions. Restringing can delay a concert or recording studio session anywhere from five to ten minutes. Unless you have a spare guitar already tuned and ready to go. It can also blow a great studio take, and throw the guitar player as well as the band off during a live performance.

This tip came in handy once I started performing, and in the recording studio. Already on a strained musicians budget, reducing the number of string sets I needed to buy for each gig was a major cost saver. It also saved on those embarrassing and time consuming moments when a string would normally break during a set or recording session.

This is not a perfect solution, but it does the job. Unfortunately, it has a major flaw: The strings are now sitting on top of the bridge. This might (and will) wear the chrome finish of the bridge. It might even leave small grooves on it. It gets even worse on older Gibson and Epiphone guitars. Old Gibsons and Epiphones’ bridges are made of nickel. A much softer metal, making the grooves much more noticeable.

Fortunatelly, you can eliminate or at least slow down this side effect. It’s even pretty simple. Simply coat the bridge piece with any chrome friendly lacquer. Even a layer or two of clear fingernail polish will work too.

I hope this tip comes in handy to all those Gibson, and Epiphone Guitar, and bass lovers out there who also suffer from excessive string breakage. This same tip can also be applied to any guitar that uses a similar bridge system, I’ve noticed over the years E.S.P., Ibanez, Paul Reed Smith, and several other guitar manufactures have adopted the Gibson style bridges in their guitars.

These Are The Best Ukulele Picks