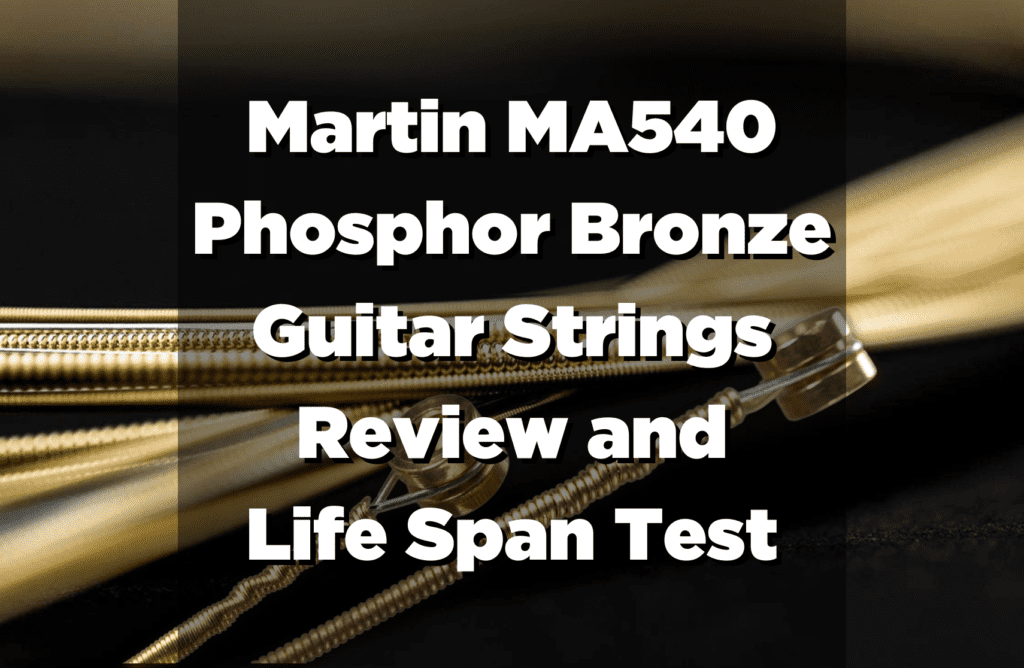 In this review, I will share my thoughts about the Martin MA540 light phosphor bronze strings. 10-15 years ago, they were one of the most popular brands of strings. But even though Martin strings are less popular these days, I still see them in almost every music store I go to. These strings are normally priced at around $7-8, but every now and then you’ll find them on sale for as low as $4.

Martin are most known for their amazing acoustic guitars, but there are also some great guitar picks made by martin and, well, strings, which we’ll cover today.

As mentioned earlier these are light strings, so the gauge for each string is as follows:

Now, keep in mind that these are light strings, not custom light or extra light. They may not be as soft or flexible as you like. Below, I’ll go over the sound quality, life span, and overall feel of the strings. This will hopefully give you an idea about what they are like.

The Feel and Sound of Martin MA540

To me, sound and feel are equally important. They go hand in hand because if you don’t like how they feel when you play them, they won’t sound good because you’re uncomfortable playing them.

See also  How to Change Strings on a Floyd Rose Bridge?

I’ll start with the sound of these strings. They are bright, loud, and have very nice sustain. Perfectly suited for Bluegrass or Country music. The top three strings have a lovely bass to them to really give that country twang sound. The bottom three strings are not bronze but steel strings and they too have a nice strong sound to them, but not to the point where they are overpowering.

There was also quite a bit of string noise when I would slide my finger across the strings. I won’t say that it’s either good or bad because some musicians prefer that feel and sound for their strings.

The strings are a bit stiff and rough because they are phosphor bronze. Slides and bends aren’t the easiest things to perform when using these strings. I’ve used these strings for fingerpicking, and although they were playable it was also a bit painful. If you are new to playing and you don’t have calluses yet, you may want to switch to a lighter gauge of guitar strings. However, if you already have well-developed calluses or you will be using a pick most of the time, you will find the Martin MA540 strings perfect for strumming because they really do have a beautiful sound.

When I tuned the strings they stayed in tune. I didn’t have problems with them slipping out of place or breaking on me like some cheaper strings tend to do. However, they do break easily if you try to tune them up passed their specified point. That’s just because they aren’t flexible enough for that kind of thing. If you do a lot of odd tunings as I do, I would recommend a lighter guitar string gauge.

See also  How To Tie A Luthier's Knot?

Who Are Martin MA540 For

So, if you focus on strumming patterns like a lot of Pop and Country artists do then these strings will be perfect for you. They ring out loud, clear and strong and you really get that country sound when you do hammer-ons and Pull-offs.

As for string life, I would say about three to four months until they lose their sound and feel. I noticed that they began to unravel near the soundhole, where my pick struck the strings, and they began to sound dull and dead. The strings also became way too stiff to perform the simplest of bends and Barre chords. After the six-month mark, I noticed my strings began to corrode and darken in color. I strongly recommend that you don’t keep them on for six months.

The price is reasonable, they sound great, and they will last a tad longer than most other strings. So if you need loud strings with good sustain, go out and give them a try.

Should you buy them?

You should buy them if you strum a lot or play Country or Pop music because of how they sound. The higher you go up in a string gauge the stiffer the strings will be. I didn’t find them to be very good for Blues, Spanish music or Jazz. That’s because I found the strings a bit too difficult to perform the bends and slides that I needed. The vibrato. too, just didn’t have the same feel for me because the strings were too stiff.

Have something to share? Comment below and tell us what you think of the strings, and how they have held up for you when you used them.

How to Get a Pick Out of a Guitar Without Harming The Guitar
Top Wrapping Guitar Strings: How to Break Less Guitar Strings
Blackstar HT-5 Guitar Amp: How to Get the Best Results from Your HT-5
What's the Difference Between Distortion and Overdrive?
acoustic acoustic guitar change strings guitar strings
Share. Facebook Twitter Pinterest LinkedIn Tumblr WhatsApp Email