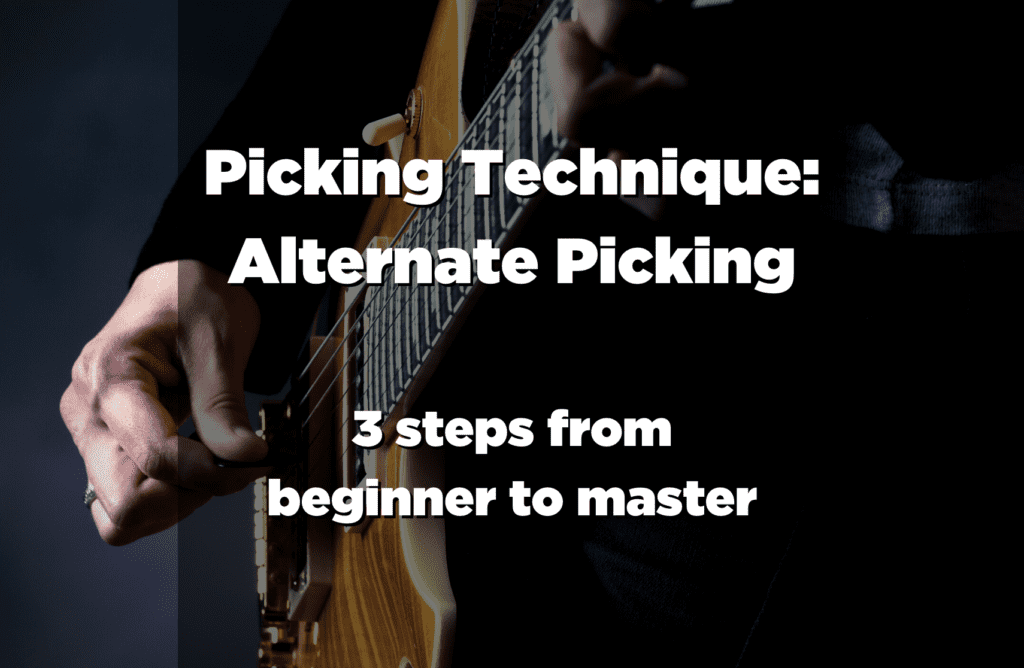 Alternate picking is a playing technique, in which a player is alternating between downward and upward motions of the pick against the strings. It is one of the most basic, yet undefined techniques there is. After learning how to hold your guitar and pick, this should be the next thing to learn. Unfortunately, 99.9% of those that are reading this right now are reading it after they’ve already developed alternate picking habits. Since there are many commonly thought of ways to alternate pick, I will be teaching the way I personally do it.

I’ll break this into 3 sections: Holding the pick, wrist movement, and practicing. In my opinion, all techniques should be practiced for at least an hour a day (each). I’ve spent literally days and days straight through practicing my alternate picking and still practice it daily.

I like to grip my pick between the top joint of my index finger and the inner joint of my thumb. I curve my thumb around my index finger to grip it tight and angle it. When I pick the strings, my pick is at a 45-degree angle with the strings. As opposed to the natural parallel with the strings technique implemented. This allows free movement across the strings without the pick getting caught up. As well as giving the sound a little bit of a scraping tone. This way of holding the pick didn’t help me just with alternate picking, but with economy picking, and later on with sweep picking as well.

When I move my wrist, I move it side to side. I advise you to stick to this strongly and initially not use any other techniques of wrist movement until it becomes a habit. I only rotate my wrist for pinch harmonics and use my arm as an affiliate to my wrist picking when needed. The tension in your wrist should be very loose yet accurate. It should feel natural to pick up and down. This too is not exclusive for alternate picking. It will help a lot with economy picking and sweeping.

When playing the guitar, only use these techniques of holding the pick. It will take a lot of getting used to, but you will. When not practicing the guitar something I did personally was put books on top of my hand and move it from side to side to get down my wrist movement. It may sound a bit weird but it worked. Place your palm on a table or other smooth flat surface. Then, put the book on top of your hand, and balance it while moving it side to side. Get this to the point where you can do it fairly quickly without needing to think about balancing the book.

Alternate picking is a great method for building picking speed. It’s also the “building block” for economy picking and other picking techniques down the road. It is very worth your time and effort for getting this one right. It will surely serve you well. If you have any questions, feel free to post them in the comments!

How To: Fingerpicking Acoustic Guitar Basics

How to Read Guitar Tabs in 5 Minutes