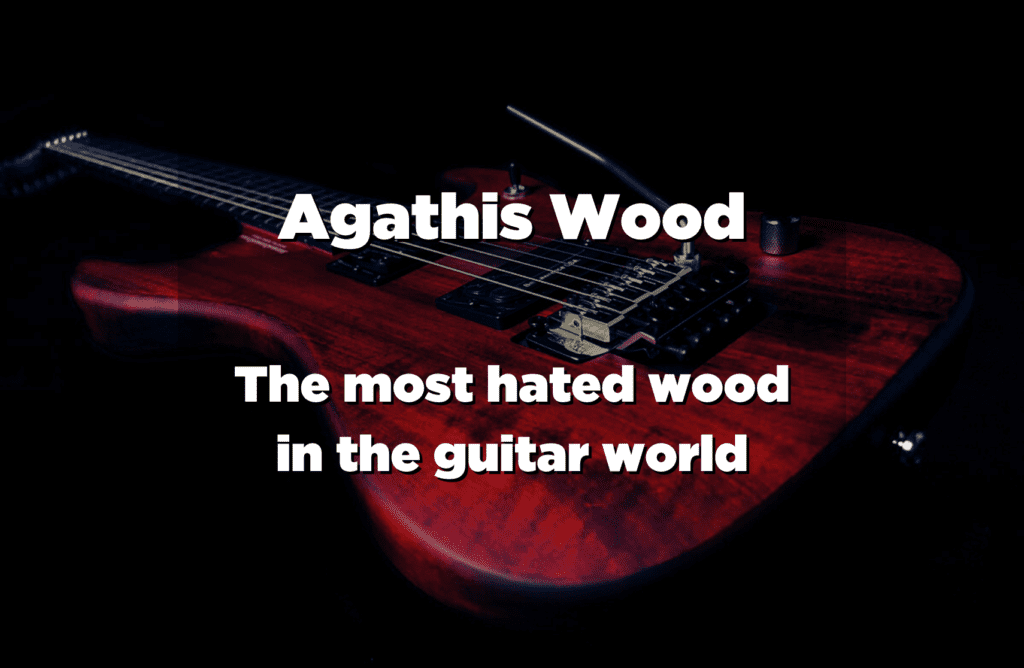 The sound of a guitar is attributed to multiple factors including its age, pickup, fingerboard, finish, and most importantly the wood of the neck and the body. Guitar bodies and necks are made out of a variety of wood choices, one of which is Agathis. Often found in entry-level guitars, this wood is obtained from conifer trees growing mainly in the southern hemisphere. In this guide, we’ll learn about Agathis wood guitars and their properties, and whether or not you should buy one.

Agathis Wood Guitars – Why Are They So Hated?

Agathis is one of the most widely used wood varieties for the guitar body. However, a large number of seasoned guitarists say they would prefer to use it as firewood than for a guitar tonewood. Some of the reasons discussed on online forums for hating Agathis wood guitars are merely myths. Let us discuss a few of these reasons.

While the look of a guitar is a subjective matter, novice guitarists who are not aware of the appearance of guitars made out of different types of wood may believe that Agathis is an ugly tonewood. The fact is that this wood is unfigured where you don’t see woodgrain or other patterns and markings like mahogany or maple. Such a plain appearance may actually be an advantage for guitarists as it makes a great canvas for painting designs.

The most common reason people give for hating Agathis is that it sounds ‘dull’. It lacks the bite you normally get in mahogany and other woods. While it can be dealt with through pickup selection, Agathis guitar would not appeal to those who judge the instrument based on how it sounds. Another complaint is that its tonal qualities don’t match other tonewoods. This wood has a balanced tone as compared to others. However, it is not so rich or resonant which is why most guitarists prefer spruce, maple, or mahogany over Agathis.

See also  Blackstar HT-5 Guitar Amp: How to Get the Best Results from Your HT-5

It is quite soft

Agathis is a softwood which means it will bend with a little pressure. Agathis guitar body would therefore get damaged easily as compared to other types of wood. So, if you are a guitarist looking to take your instrument through the years or someone who tours and carries the instrument from one place to another, owning Agathis guitar is not the best bet for you.

Also known by the name ‘Dammar’ and ‘Kauri’, Agathis wood belongs to the evergreen trees found in the islands on the South Pacific. As it grows abundantly in these areas, it is more affordable than alder wood which has similar properties. It is, in fact, one of the most affordable kinds of tonewood for guitar bodies. It is considered quite similar to mahogany which is a darker yet punchy wood with excellent sustain for electric guitars. Most people describe Agathis as ‘poor man’s mahogany. This wood is also used as a replacement for basswood.

Agathis is a softer wood that makes a lighter guitar than other tonewoods. This can be ideal for beginners who would not mind compromising tone and durability for affordability. However, it is not as durable and resonant as other woods. Connoisseurs and experts prefer to choose higher-quality wood options for their guitars.

Another amazing property of Agathis wood is that it is not figured. Figured wood has a grainy, rough appearance than unfigured wood which is comparatively plain-looking. While this quality makes Agathis less attractive than mahogany, it is great for painting designs over it. You can create a unique, beautiful guitar with artwork using this kind of wood, improving its aesthetic and lifespan. Additionally, its relatively plain look makes a great foundation for a custom pickguard to pop.

Agathis is a great choice for the body of an electric guitar as its tonal quality does not influence the sound of the instrument profoundly. As these guitars get their sound from their amplifiers and pick-ups, the type of wood bouncing off the sound becomes less relevant. You can invest in effects pedals or humbuckers to get rid of worrying about the electric Agathis guitar sounding bad.

Some guitarists believe that Agathis body electric guitars with set-in necks have better tonal quality. Though the difference is not much noticeable, you can opt for a set-in neck if you want to get the optimum tone out of your instrument. So, if you have an electric guitar made up of Agathis, you can improve the sound by installing a new set of pick-ups. Invest in high-quality single-coil pick-ups to get a sharp and punchy sound. Humbuckers or double-coil pickups would work well for a richer, deeper sound you would expect from expensive instruments.

Agathis Guitar Tone – What You Should Know?

Every guitar is made up of wood with tonal properties that refer to the sonic character a wood gives to the instrument’s overall sound. Rosewood fretboards generally sound bright while mahogany body guitars sound warm. These differences are subtle and not noticed by casual listeners. But seasoned guitarists who want the perfect tone have a preference for wood.

Agathis is not known to have strong tonal properties and most people believe that it has none and sounds dull. It is not true that this wood completely mutes the sound of the guitar. Though tonewood affects the tone to an extent, it is not so prominent as you might think. The type of wood affects the tone profoundly for acoustic guitars. However, it doesn’t matter much if you have an electric guitar.

This means if you have an acoustic guitar with an Agathis body, you might not be able to do much about its tone. This is because these guitars get most of their sound from their bodies. If sound quality is highly crucial for you, it is best to opt for a higher-quality guitar. However, if you are a beginner, an Agathis guitar is great for practicing and improving your skills.

Agathis is a popularly used tonewood for affordable guitar varieties. While it is not famous for its resonance or richness, it is quite durable and reliable as opposed to what you may read on forums. Moreover, there are several benefits to owning an Agathis guitar. If you are in search of an entry-level instrument that suits your budget, Agathis is an ideal option for you.

How to Buy Your First Guitar
How to Choose a Guitar Tuner? A Full Guide For Guitar Tuners
All Types of Electric Guitars Explained
How To Tune A Guitar
agathis wood
Share. Facebook Twitter Pinterest LinkedIn Tumblr WhatsApp Email

Ohm Picks – Everything You Should Know (Full Review)