How To: Fingerpicking Acoustic Guitar Basics 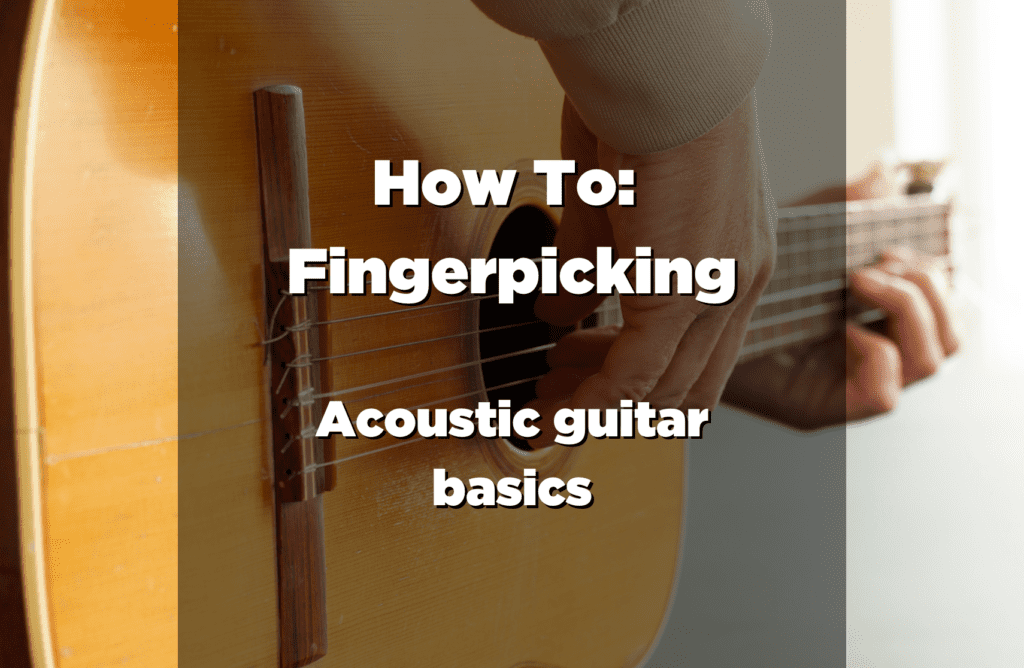 All you guitarists out there, especially beginners, if you want to add a full-sounding finger-picking style to your repertoire, then this is the guide for you. Fingerpicking acoustic guitar isn’t difficult, and if you really want to learn then you probably can, as long as you practice.

If what you already play or desire to learn is classical guitar then this type of picking is likely not for you. What I’m writing about is the popular music picking style heard on such classics as “The Boxer” by Paul Simon or “Blackbird” by The Beatles. You may not be able to start off playing these pieces, but keep at it, and watch other players. You’ll be amazed at how great you can sound once you get the patterns down. The only other requirement before this type of playing makes sense is that you can play basic chords in first position, like D, C, G, A, E, etc.

So let’s get going. Start off with the thumb of your strumming hand, which for most people is the right hand. The thumb is going to play the bass notes on the instrument, which means it plucks the D, A, and low E strings in various combinations. Usually, it alternates between two strings. For example, on a D chord in first position, the thumb would usually start on the (open) D string and then alternate to the A string, back and forth between the two in rhythm.

Push through the boring part

OK so do that for a while. Sure it’s boring, but necessary. Once you get pretty bleary-eyed doing that, change the pattern. Following the instructions above, pluck the first string on the 1 beat, strum the high 3 strings once on the two-beat, pluck the second bass string on the three-beat and strum the chord again on the four-beat. Do that for eight or sixteen beats on one chord, then switch to another. Pick chords that go together.

The next step is to pluck all three high strings instead of strumming them. Use your ring finger on the high E string, your middle finger on the B string, and your index finger on the G string. For this type of plucking, rest your fingers on or just a millimeter away from the strings, and bend the fingertips up by closing the top two knuckles on those fingers. Keep your pinky straight. Keep changing chords, and pick up certain fingers on the chording hand and hammer down or pluck off the strings as you strike them. Personally, when fingerpicking acoustic guitar, I like to use fingerpicks, and I recommend you to at least try some out.

The important thing when starting out fingerpicking acoustic guitar, and in general, is to count those 4 beats as slowly as you can. For example, count 1 beat every 2 or 3 seconds. It may seem excruciating, but it is easy to speed up after a while. Also, hang out on one chord while concentrating on what the finger-picking hand is doing. The idea with the beats is to establish an even rhythm. As you get the rhythm going, for example, play 4 measures on the D chord, then 4 measures on the A chord, then repeat. Throw in 2 or 4 measures on the G chord. Pick up speed on these patterns as you feel more and more comfortable.

One of the things I enjoy most is to do a song like “4 and 20” by Stephen Stills, where you have to pay attention to the thumb going back and forth between the two bass notes (lower the low E to a D bass note) while also concentrating on the high notes. I guess you piano players are used to splitting your brain concentration in half because you’ve got two different things going on, one with each hand.

How to Play Slide Guitar and Get a Good Tone