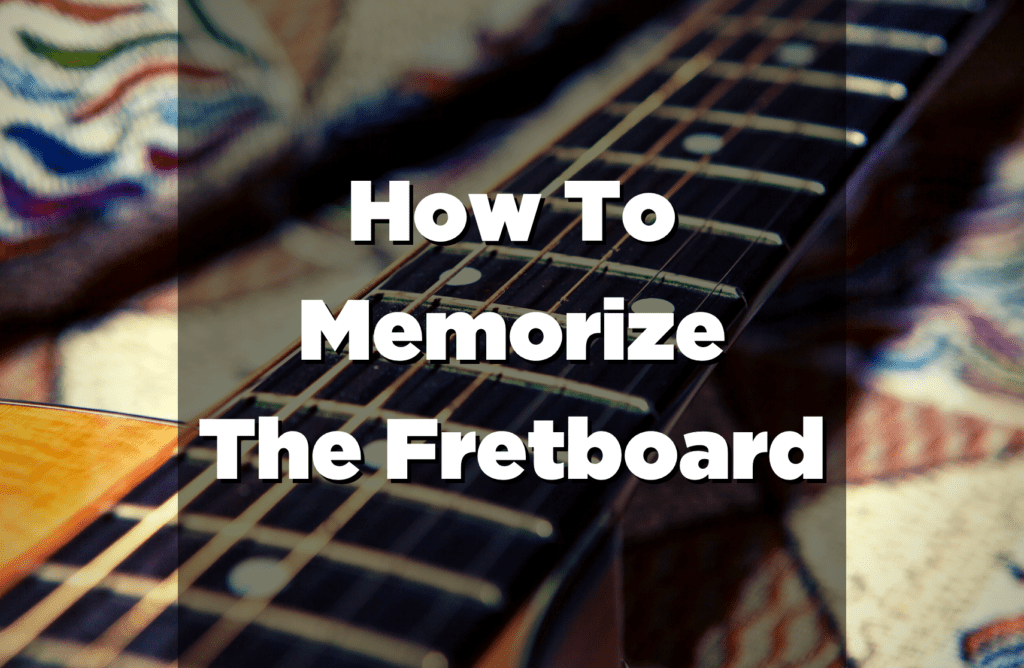 Why Should You Memorize The Fretboard?

First, I’ll explain the importance of learning every note on the guitar fretboard. If you know every note, you’ll be able to do a couple of things. One, you will be able to find chords all over the guitar. Two, you will be able to improvise as easily as talking. Three, you’ll get all the babes with your mad guitar skills. Trust me, that’s how guitars work. That’s why they were invented along with puppies and pickup lines. All to get hot chicks. But I digress. On to more important matters.

It may seem daunting at first, but once you get the wheel rolling you’ll see that it really isn’t that bad at all. I’ve laid down the steps in which I learned the entire fretboard. This is the way I used to teach it too. I feel that it divides a big challenge into a few simple tasks, that can be achieved pretty easily.

To start learning the notes of the fretboard, you need to start easy. So why not start off with the note of the main major scale of which every other scale is based on in western music. Also, the lack of sharps and flats plays a major role in this. Without learning sharps or flats on the guitar fretboard, your brain will be able to easily comprehend the other notes without having to concentrate on the extra weird symbol after the letter. Tune your guitar (it’s important), and let’s start

Finding all the C’s on the Fretboard

To begin the actual learning, find C on the thinnest E string. It will be the 8th fret of the thinnest E string. Now pluck, or hit, or whatever you want to do to remember that. Where is C on the E string? The 8th fret. Now go to the 1st fret of the second or B string. This is also C. Remember: B string’s first fret is C. So play both of those strings on the C note over and over for a little bit. Think about C the entire time you are doing this. It will stick in your mind better. Now head on over to the third string or G string. The C is at the fifth fret here. On the fourth string, the C is at the tenth fret. The C on the fifth or A string is on the third fret. And finally, the thick E string will have the C on the 8th fret again.

So now you should have a general idea of where C is everywhere on the fretboard. Now get a metronome. If you don’t have one, buy one. If you are dirt cheap like me, go online and search for a free one online, but I still prefer a handheld metronome because it’s more portable. Ther’s a great app too, called SoundBrenner. Set it to around 60 to 80 beats per minute and start from the thinnest E string and play each C going up to the thickest E string. Now switch the order. Play the third string, fourth string, sixth string, second string, first string, fifth string, in that order, or make up your own order. The whole point is you do not want to memorize them in a pattern.

See also  How to Read Guitar Chord Charts and Diagrams

12th fret and above

Now use the exact same method, but for E and F. Spend a day on each. Use a metronome. Learn each note and its sound.

Learning the notes: G, A

You should get it by now, but do the same for G and A. The reason I have it split up like this is for a very important reason. Each note in these conglomerates is extremely close to each other on the fretboard and thus will be easy to help you learn every note on the guitar fretboard.

Fill in the sharps and flats

After you have learned all of the non-sharp or flat notes, it’s time to move on to the daunting sharps and flats. But it’s really easy if you have actually memorized all the non-sharp or flat notes. All you have to do is place them in between the respective notes. Need to know where Bb is? Just go to wherever your B’s are and go back a fret. So if you are on the 4th fret on the G string, just go to the 3rd fret and there is your Bb. Need to know where your F# is? Just go up a fret from wherever the F is. If your F is on the D string 3rd fret, just go to the fret above it at the 4th fret. See, not too bad.

The rule for flats is to travel 1 fret below your note to get the flat. The only two notes without flats are C and F. No such note as Cb or Fb. Those would just be B and E respectively. Sometimes in scale naming, but that’s about it. Don’t go calling notes by that name though.

The rule for sharps is to travel 1 fret above your note to get the sharp. Again the only two notes without sharps are B and E. There cannot be B# or E#. In reality, those notes are C and F respectively.

Ok, now you should have learned every note on the fretboard. Now, what do you need to do? Well, that’s easy. Apply your hard effort to improve your ability to slay that guitar. Start to memorize the scales, whichever ones float your boat, but major scales are the easiest and best to start with. After you memorize scales, you can apply that knowledge to improvise all over the guitar fretboard by just recalling your notes of the fretboard. If a song is in the Key of F major, just use your F major scale and now that you memorized those notes, you can play those notes to make solos or what have you. Have fun with your newfound knowledge of the guitar.