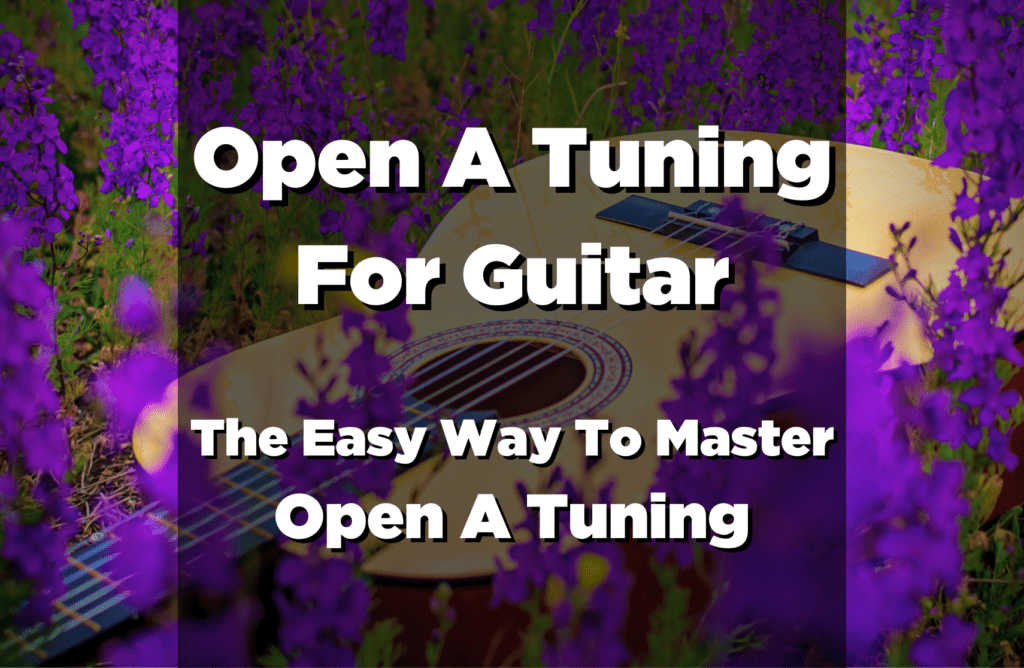 The notes that make up an A chord are:

There are some players that use open A very successfully in their playing. Blues guitarists use Open A frequently allowing the guitarist to use the slide to form chords. I use Open A tuning when playing Robert Johnson’s Crossroad’s Blues and Come on in My Kitchen.

Switching To Open A Tuning From Standard Tuning

Starting with standard tuning EADGBE we will now tune to EAEAC#E.

The lowest E string remains tuned to E. Using this A string as a starting point, place your finger on the 7th fret of the low A string (E). Now adjust the 4th string up one whole step to E until it matches the E on the low (5th) A string. Notice that the 4th string is now one octave higher than the low E (6th) string.

Next is to tune the 3rd string up one whole step from G to A. This can be accomplished by fretting the 4th string on the fifth fret (A note). This note matches the tone of the 3rd string. Notice that this note (A) is an octave higher than the A on the 5th string.

See also  How To Tune A Guitar by Ear

The last step is to tune the B string a whole step up C# note. This can be accomplished by fretting the 3rd string on the forth fret (C# note). Compare this note while adjusting the B string up to C#.

The final step is to check your tuning for all the strings one final time. You have just changed the surface tension of the guitar, so by adjusting one string, you might have inadvertently adjusted the tuning of another string.

Have fun playing in Open A. Try using a Capo on different frets to change the key of the guitar and the song you are playing in. This is a very fun tuning while playing blues. Any guitar player can easily produce the classic root-forth-fifth progression in this tuning.

How to Read Guitar Tabs – Guitar Lesson for Beginners

The Most Beautiful Guitar Picks You Can Buy