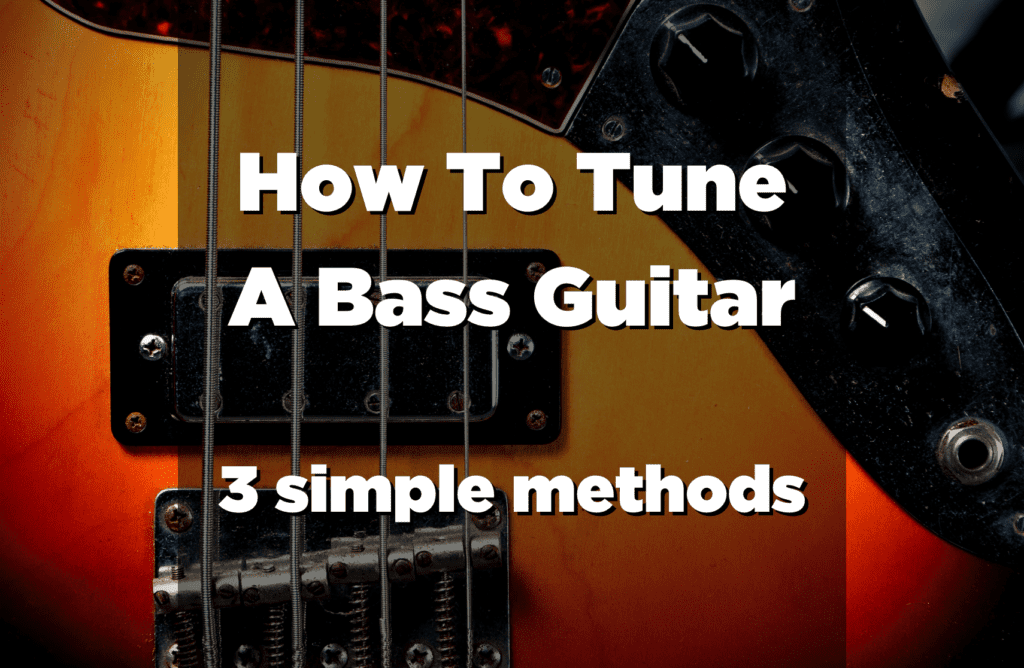 Tuning often confuses new Bass players, even if they have a tuner. There are many ways to tune a Bass guitar and any of them is fine. Just as long as the result is your Bass being set to the desired tuning. Similar to tuning a guitar, a bass guitar can be tuned easily with a tuner. It can also be tuned by ear to itself, or by using a reference note from another source.

While these are typical tunings, they are not set in stone. You can tune your Bass in hundreds of different ways. But if you want to play covers or other people’s music, you’ll usually want to be in the standard tuning.

Here are three ways to tune your Bass without too much of a headache:

Plug your bass into your tuner just as you would into an amp. Turn the tuner on and make sure it’s set to “Bass” and “Auto”. Next, turn the volume knob on your Bass all the way up (clockwise turn). Now, starting with the lowest (lowest in tone = thickest) string, strike the string and observe the tuner. Allowing the note to ring, adjust the tuning key for that string (at the end of your Bass’s neck) until the tuner indicates a green light or “-0” tune on the appropriate note. For example, if you’re tuning a 4-string, the first string should be tuned to a low E. Once the tuner indicates that the string is right on the E note, move on to the next string. This way is, in fact, the exact way you’ll tune your guitar. This is the most accurate way for tuning a bass guitar.

Before self-tuning, you have to get an accurate note from somewhere. It could come from another instrument, a tuning fork, or from a digitally played song that has known notes. I would save the song thing as a last resort because of two reasons:

Tuning The Rest Of The Notes

This process can be used the same way for both 5 and 6 string Basses. Assuming they’re in the previously stated standard tunings. Don’t forget, the fat string should be tuned to a really low B.

This method isn’t the most accurate way to tune your bass, so it’s always good to check your string tones against each other (using octaves) or other instruments.

This technique is almost identical to “Tune to yourself”. The only difference is the way we tune our bass’ strings to one another once we have an accurate note. Instead of using the 5th fret of the E string to find our A, we’ll use two harmonic E’s to tune the A string. Here’s how it works:

Producing Harmonics And Using Them To Tune Your Bass

Assuming the E-string is tuned, touch the E-string over the 12th fret. Don’t push the string down to the neck, just touch it directly over the fret. Then strike the E string (while your finger is still touching the string at the 12th fret). This should produce a ringing E note. This is a harmonic E note. Many people compare the harmonic tone to bells or chimes, so keep in mind that’s how they should sound. After you strike the harmonic E, you can move your left hand to the A string (7th fret) and the harmonic E should continue to ring. Immediately touch the A string above the 7th fret in the same manner and strike the A string with the right hand. This should create another harmonic E note that is identical in pitch to the one you just made on the E string.

Harmonics tones are a much clearer and more effective method of tuning Basses and Guitars. But electronic tuners are hands down the most accurate. I strongly suggest becoming proficient in harmonic tuning for those times when you don’t have a working tuner. But I also recommend buying an electronic tuner if you don’t already have one.

How to Tune a 5 String Bass?

A 5-string is typically tuned, starting from low to high, to B-E-A-D-G.

How to Tune a 6 String Bass?

A 6-string is typically tuned, starting from low to high, to B-E-A-D-G-C.

There you have it, and now you should be able to tune a bass guitar in no time, and without any issues. Let me know in the comment if it helped you, or if you have another tuning method I didn’t add. See you next time!