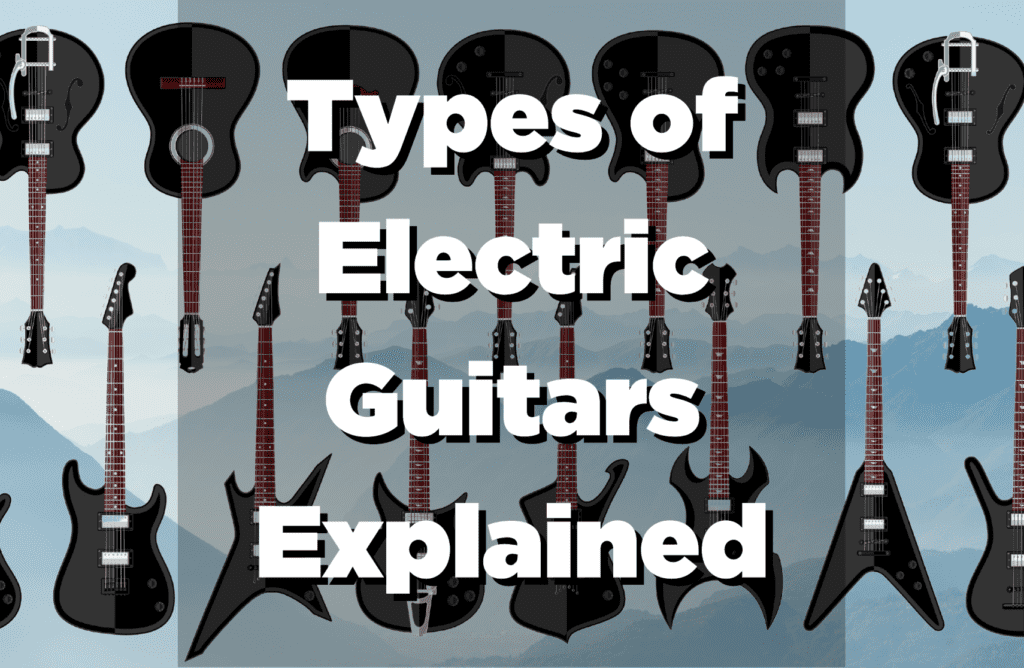 In the article, we’ll go over the history of these instruments. We’ll also learn some of their characteristics and understand what style of sound each type of guitar excels at. Obviously, there are different types of guitars, and each of those has its own subtypes. In this article, I’ll describe the most common types of electric guitars.

Electric guitars have thousands of different body shapes and styles, with more added daily. Each luthier makes their own twist to fit the design they have in mind. Each model comes with different guitar parts unique to it. Below are the most common types of electric guitars.

Among all types of electric guitars, the Telecaster has a special place. Although not the most famous, this model is the origin of mass-produced solid-body guitars. Originally developed by Fender in the early 1950s, the instrument was initially called the Broadcaster.

Characteristically, the Telecaster has a body made of Alder wood. It’s also common for this instrument to have a neck and fingerboard constructed of a single piece of Maple wood.

As for the pickups, the Telecaster basically has two single coils. The guitar has a bolt-on neck, a three-position switch, and two knobs, one for tone and the other for volume.

The timbre generated by this combination of features is quite unique and conquered the hearts of American country music artists. However, other styles also have an intimate relationship with the Telecaster, such as blues, rock, and jazz.

This is one of the best-known types of guitars of all time. Also manufactured in series from the early 1950s, the Les Paul model is Gibson’s flagship.

One of the most striking characteristics of the Tele is that its body is made of Mahogany. Interestingly, nowadays, the production of this guitar model in the United States is made of Maple. This is because of the environmental laws in the country.

The neck of Les Paul is glued to the body, which differs greatly from other types of Fender guitars. This characteristic directly influences the tone and sound you can get from it.

The guitar usually comes with two humbuckers, which makes the sound “fat”. Ideal for highly distorted playing. Some Les Pauls come with three humbucker pickups instead of two.

When it comes to guitar types, this is probably the most famous guitar type of all time. Perhaps this phrase is a bit of an exaggeration. After all, we can’t know for sure which is the most popular instrument on the planet, but for sure, the Stratocaster is one of the first options for many guitarists.

Fender created this model in 1954 as a derivation of the Telecaster. Later popularized by legendary guitarists such as Jimi Hendrix. The versatility of this instrument is what makes it a best seller.

The versatility of this instrument makes it used by musicians who play different genres and styles. Notably, rock, blues and funk guitarists do very well with the Stratocaster. Some famous guitarists who use this type of guitar are Eric Clapton, Yngwie Malmsteen and John Frusciante.

In the mid-1960s, Gibson began to notice a drop in sales of the Les Paul model. Some criticisms plagued the brand’s famous model. Among them, it is worth mentioning the weight of the instrument and the difficulty of playing its highest frets.

With this in mind, Gibson launched the Les Paul SG, which they later renamed just SG. The guitar was designed to solve these “problems” that some people saw in the Les Paul. The name SG comes from the initials of the words solid guitar.

The body of the instrument is made from Mahogany wood. The guitar usually comes equipped with two or three humbuckers. The guitar also has individual tone and volume controls for each pickup.

A curiosity about the SG is that, although the pickup is identical to the Les Paul, the tone of this instrument is quite different. The model has been acclaimed by great guitarists such as Tony Iommi (Black Sabbath) and Angus Young (AC/DC).

This is one of the guitar types that legends have immortalized. Although it is not a widely used model, it has a special place in the hearts of many rock’n’roll guitarists.

The Flying V came about in 1957 with an idea from Gibson: to create instruments with a more futuristic design. However, the idea did not work out, and Gibson discontinued the production of the Flying V in 1959. The instrument only returned to the market at the end of the following decade.

The Flying V comes equipped with humbucker pickups, which makes it a perfect model for those wanting a heavy sound. As for the wood it is made of, the instrument is usually made of Korina, which is related to Mahogany.

Another guitar produced by Gibson to reach more futuristic models is the Explorer. First released together with the Flying V in the late 1950s. It took a little longer to go out of production for the first time.

In 1963, Gibson discontinued its production because of the low popularity of the model. In 1976 they started producing the guitar again. This happened because other brands started to produce this type of instrument and become successful in marketing it.

Like its sister, the Flying V, the Explorer is made of Korina wood and comes equipped with humbucker pickups.

When the Jazzmaster was first released in 1958, it was aimed at Jazz guitar players. It was part of Fender’s effort to widen its client base beyond Strat and Tele players. Eventually, Jazz players didn’t seem to like it that much, but the Jazzmaster did find its audience. It became the go-to guitar of the surf rock genre in the 60s.

4 years later, in 1962, Fender released the Jaguar. Another guitar with the exact same body shape. It was first adopted by the surf culture, who were looking for a high-end version of the Jazzmaster. As soon as the genre died, though, the Jaguar had no core audience anymore. That was until the funk wave of the 70s.

Fender Mustang is a solid-body guitar model introduced in 1964 as part of Fender’s student line (with Musicmaster and Duo Sonic). The manufacturing of it has stopped in 1982, and began again in 1990 and it’s till active today. The Mustang model became popular in the 90s thanks to artists such as Kurt Kubain, who liked its unusual pickup setting of 2 single coil pickups.

Jazzmaster vs Jaguar – What’s the difference?

Gibson ES 335 was the first semi-hollow electric guitar produced commercially with a thin body. First introduced in 1958, it became an instant hit. It features a center block that helps with preventing unwanted feedback and two humbucker pickups. Its shape inspired many other models of relatively similar guitars, such as the Ibanez Artcore AS-73 and more.

See also  How to Change Strings on a Floyd Rose Bridge?

There are essentially four different types of electric guitars: Solid body, semi-hollow, hollow-body, and Chamberd guitars. More often than not, a body shape will be associated with one of these types. In some rare cases, a certain model will have more than one version.

First, allegedly made by Les Paul in the 40’s. Later, brought to mass production by Fender in the 50’s with their Broadcaster model (later renamed Telecaster). A solid body guitar is essentially a guitar without any type of soundbox or sound hole. It is amplified using different types of pickups to achieve different tones.

Examples of solid body guitars include Fender Stratocaster and Telecaster and Gibson Les Paul and SG.

Hollow body guitars were the first electric guitars to be amplified with pickups. The first thing you notice about them is that, unlike the acoustic guitar, they don’t have a soundhole. Instead, they have two F-holes on the sides and pickups between them. F-holes exist on many early self-amplified instruments, such as violins. They excel in sound projection and can generate louder volume than a traditional soundhole.

Some of the early makers of hollow-body electric guitars were D’Angelico, Gibson, and Epiphone. Early models were often called Electric Spanish Guitars.

Chambered electric guitars are basically solid body guitars, where some of the wood was removed to reduce weight. They sit somewhere between a solid body and semi-hollow guitars. That’s because even though the wood removal is for weight reduction and not changing the sound, they do sound different.

Chambered guitar sound like a solid guitar, with small hints of a semi-hollow guitar. Some even describe their sound as “airy”, which I think is pretty accurate.

Today we learned about different types of electric guitars. We looked into different models, as well as different methods of construction.

If you enjoyed it, take a look at other articles about guitar gear. If you have any more questions, leave a comment below. See you next time!