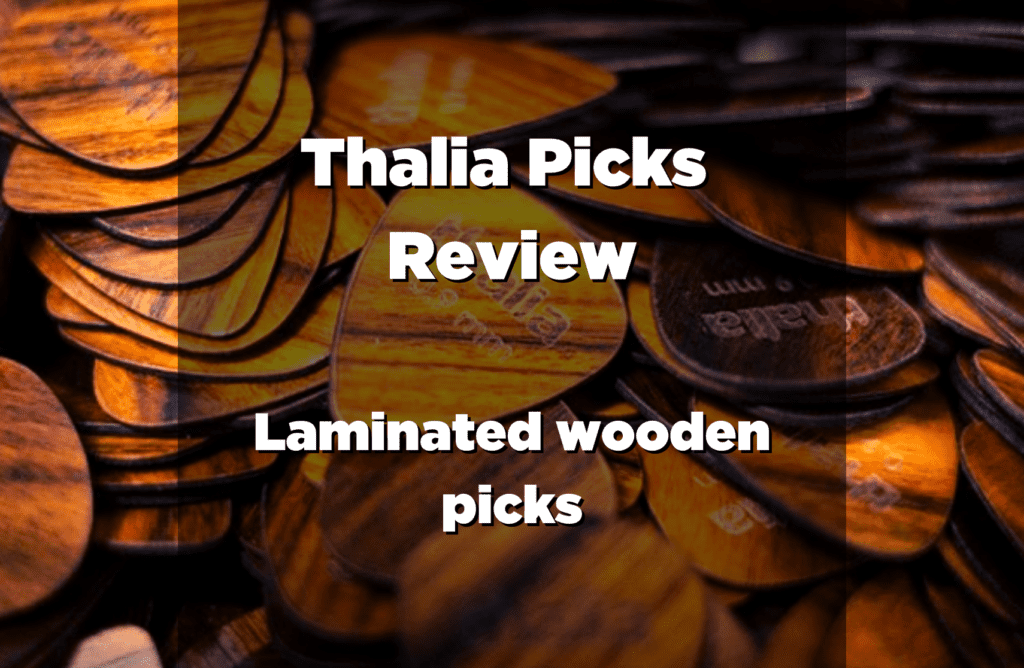 When Thalia Capos announced their line of wooden picks a few years ago, I was so excited. I never had any experience playing with wooden picks and I really wanted to try that. Their capos were 2 levels above any other capo in the market at the time and I had no reason to believe that their picks would be any different. In fact, I bought the picks so fast, I didn’t even read the product description. I ordered 2 sample packs, one of each gauge (0.9mm and 1.4mm).

Thalia Capos is a father-daughter company, of the type that can make you really jealous. Thalia came up with the idea for a really innovative capo, then she and her father launched a successful Kickstarter campaign and the rest is history.

What are they made of?

Thalia picks are made of two or three thin layers of wood glued together. They claim that it gives the wood extra strength and durability. The available wood species are: Santos Rosewood, Purpleheart, Bubinga, Ebony and Tigerwood.

How do they sound?

They sound great. The tone is just warm enough, they are extremely loud (in comparison to other wooden picks) and don’t have that click you get from plastic picks. Overall I was really happy with it. If only all of that goodness would’ve lasted for more than 15 minutes… After a few minutes of playing their great sound started to die, as the picks wore, the tone became duller and duller.

Thalia Picks come in 4 different shapes: Standard, Jazz III, Teardrop, and Triangle, and in 2 different thicknesses: 0.9mm and 1.4mm. The ones I bought were from their first version, which didn’t have a bevel. Now I see that they released Thalia Picks 2.0, which are beveled. I was quite annoyed with all the noise they made out of beveling their picks because it should have been made properly in the first place. Anyway, after 15 minutes of playing, the picks started to wear and change the tone. Everything I loved in the sound was now gone. the more the picks wore, the worse it got. They weren’t comfortable to begin with. It’s very hard to play with a non-beveled pick.

They sounded great for the first 15 minutes, but the tone died as soon as the picks started to wear. I was so disappointed because I really wanted to love them. One thing I did take from it is my love for wooden guitar picks. The 1.4mm felt much thicker than they are. And the 0.9mm felt very fragile, especially with the triangle shape that just bent in my hands.

The grip is good, they stick to the fingers very well, without any of the grippy textures found on so many picks (which is usually not for me, other than a few examples).

If you read any of my reviews so far, you know I’m a huge Jazz III shape fan, It is true to Thalia Picks as well. the fact that it’s both short and wide kept it going a little longer than the rest, even though after an hour of playing with all of them, they all got back to the tin in which they came in and stayed there until I started writing this review many months later.
Thalia Picks are currently ranked last on our Best Wooden Guitar Picks list.

A variety pack of 8 Thalia picks will cost you anywhere between $19 to $30, depending on the shapes, design, and wood species you want. Their picks also come in packs of 6, but only for picks of the same shapes and it starts at $10. You can buy their picks from Thalia Capo’s website.

One last thing and a quick disclaimer

Even though it’s kinda obvious, this is NOT a paid review. It was written based on my own experience playing the previous version of Thalia Capo’s picks, and based on that only. They didn’t send me these picks, I bought them about a year and a half ago.

Pick Makers, if you want your picks reviewed, or have anything cool you made and want to share – send me a message, I’d love to hear from you!

The sound is good, but only until the pick wears down. Unfortunately, it takes minutes. The grip is decent, even without additional textures. It feels too stiff, Like I needed to fight with strings. The price is not too expensive, at about $2 per pick it's even cheap, But I still wouldn't buy them again.

How To Easily Develop a Successful And Fun Guitar Practice Routine

How to Play Guitar Scales Easily