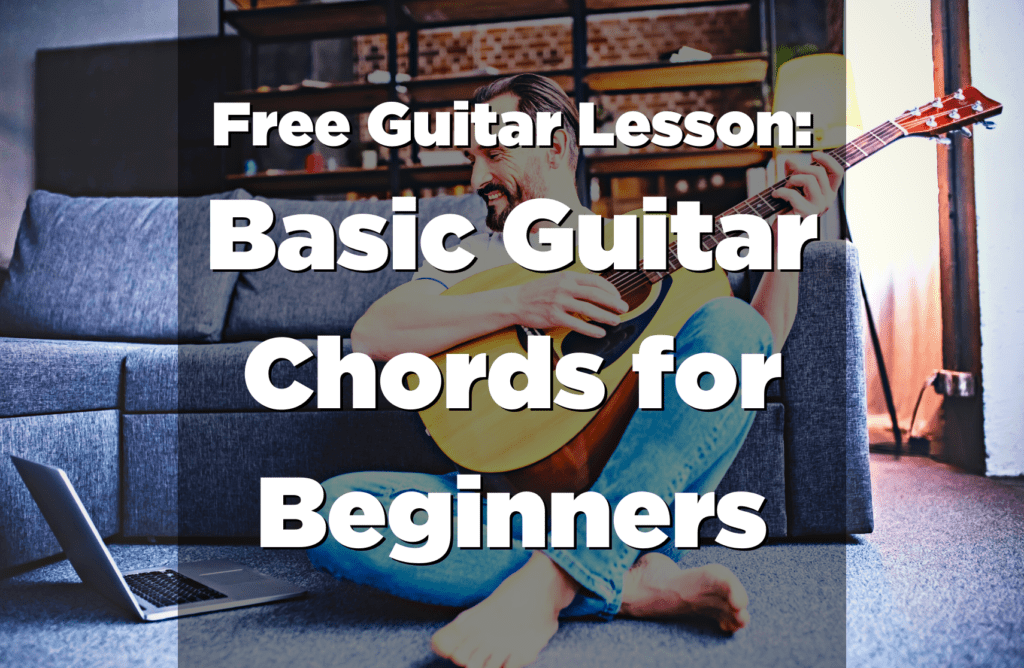 In this article, we’ll start delving into basic guitar chords. We’ll do it by reading charts of open chords and learning some more intricate concepts concerning your first few chords. We’ll also look at some more in-depth information you get from tablature. I suppose that we should jump right in.

What Are Open Chords?

Open chords utilize open strings, which are strings we don’t need to fret. This doesn’t mean that every note is open but that at least one of the strings should be (usually two or three). If this isn’t the case, then it isn’t an open chord.

For future reference, tablatures will often intimate what fingers play what notes in a chord. If not tablature, then chord charts certainly do. P means pinky, i means index, m means middle, r means ring, and t means thumb. Bear that in mind as you go through all of these exercises. To learn more about reading tabs, read this article.

Note, too, that when there is an x, it indicates either that the string is muted (as in your fingers rest on it to block the string from making sound, but they don’t press down to generate a note) or it’s not meant to be played at all. In our case, you just don’t play them.

Before anything else, whenever you pick up your guitar, make sure it’s in tune. If it isn’t – tune it. I can’t stress enough the importance of playing with a tuned guitar, especially when you’re in the stage of developing your musical ear.

There are three foundational open chords that many songs are built off of. Off the top of my head, I can say Sweet Home Alabama, Brown Eyed Girl, and Ring of Fire are three extremely popular songs that just use these three basic guitar chords. You can work on playing them and switching between them.

This will also help you understand when to play what on a guitar. The first chord is G major. However, major chords often go by their root’s name. Therefore, call this G. Hold your pick (if you need help, read more about how to hold a guitar pick) and let’s start.

And this is how it sounds:

And This is how the D chord sounds:

With those three chords, you can play a lot of songs. Try this progression:

Note that every bar is marked with a | sign and contains 4 beats. In our case, you play the D chord 4 times, the C chord 4 times, and the G chord 8 times. Practice it for a little bit (preferably with a metronome).

And just like that, without even noticing, you played the verses of Sweet Child O’ Mine by Guns N’ Roses.

Now, we’re going to talk about open minor chords. You’ll notice that all of the minor chords are just making small changes to the major chords.

And this is how it sounds:

This is how the Em chord should sound:

See also  How to Master Fingerpicking With 5 Simple Tips

Note that the first bar contains both C and G. This means that the G and C chords are played twice, and the Am chord is played 4 times. Together, these chords make the entire song “Simple Man” by Lynyrd Skynyrd.

I’m now going to cover a bunch of other major chords that are worth your time learning. You can practice all of these and practice moving between them, as well as see which chords sound the best together.

Those are all of the major open chords on the guitar. Other major chords can be a bit more convoluted, and we’ll cover them in the future.

One thing I encounter a lot when working with new guitarists is that their sounds will be a little crunched. What I mean by that is that they’ll try to play a string, and they won’t get any sound from it, or if they do, it’s very dimm and buzzy rather than the full-bodied tone we want.

A lot of the time, beginner players will accidentally and inadvertently mute strings that they’re not really trying to mute. The best way to combat these things is by making your hand as erect as possible and ensuring you’re only touching the strings you want to touch.

Also, it may go without saying, but it will get easier as time goes on. For now, make sure you’re pressing hard enough to get a sound. Don’t press too hard, or your sound will go sharp, and you’ll probably damage your hands in the long run. Rather, make sure that you’re pressing down on the frets just hard enough to get a good sound. When you’re starting out, this may be particularly difficult.

It’s also worth noting as a new guitarist that the finger positions aren’t hard and fast; that is, your middle finger doesn’t have to go where I’ve written middle. You can use your index or even your pinky instead if it feels more comfortable.

See also  How To Improve Your Guitar Licks

The ultimate goal is simply that the frets in question are being pressed down and that you’re getting a decent sound out of the guitar and not being hindered from quickly making chord changes whenever you need to.

Soon, The Pain of Playing Will Go Away

Your fingers haven’t built up the strength they need for this process to be relatively straightforward and painless. Over time, you’ll build what are called calluses on your fingers.

Calluses are hardened places where skin has been repeatedly broken and has toughened up, in a sense. If you’ve ever seen somebody who likes quilting, you’ll notice that they have developed calluses on their fingers from where they’ve accidentally pricked themselves.

It’s the same principle. If you damage your skin a lot over time, you’ll eventually build up resistance to it. You can make yourself build calluses faster by dipping them in rubbing alcohol at the end of every practice session and by practicing regularly enough that you get proper practice and your fingers build up the necessary strength and have the necessary exposure for calluses.

In this article, we’ve covered most of the basic minor and major open guitar chords. I hope you enjoyed it and learned that even though starting to play the guitar can be intimidating, it is doable. With the chords you learned today, you can play thousands of songs, including Love Me Do and Elenor Rigby by The Beatles, Zombie by the Cranberries, Wish You Were Here by Pink Floyd, Clocks by Coldplay, and more.

If you enjoyed this article, visit our free guitar lessons section for more content like this. If you have any questions, feel free to ask them in the comments below, and I will make sure to answer. See you next time!