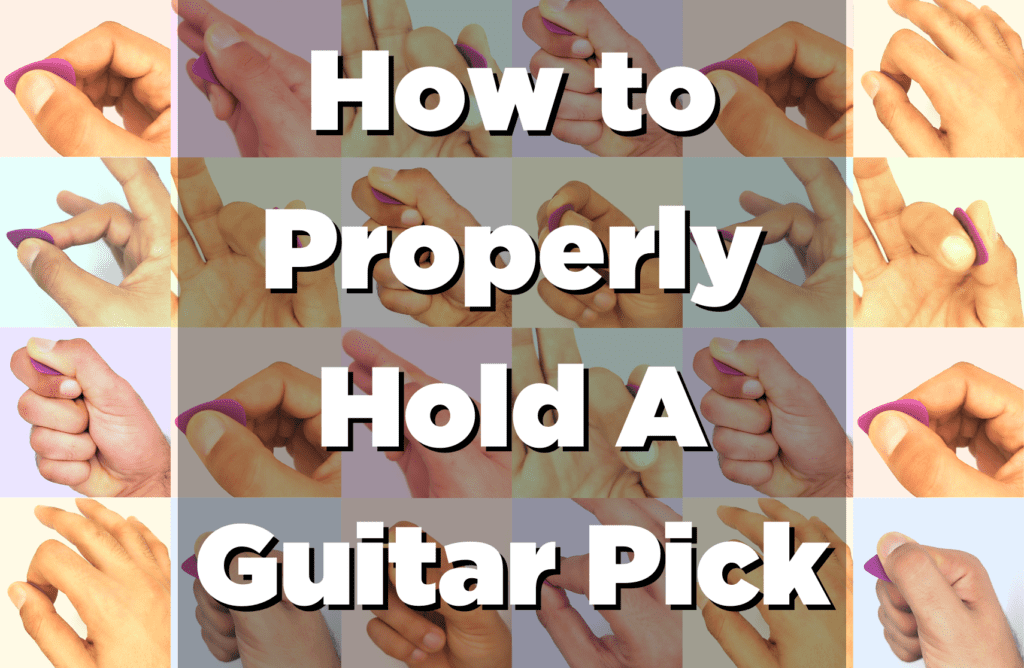 Holding a guitar pick is one of the first things you do when you pick up a guitar for the first time. In most cases, a player will just hold the pick in the way that feels the most natural and get used to it. Even though there’s nothing wrong with that, some ways of holding a pick are more versatile than others. Today we’ll look into different ways of holding a guitar pick, and go over each’s pros and cons.

How to Hold a Guitar Pick?

There are seven common ways of holding a pick, and three ways to position the “unused” fingers. This gives us an astonishing 21 different ways to hold a pick. Each method has its own advantages and shortcomings. The most important thing you need to notice is that the way you choose to hold your pick is comfortable and not restrictive.

In 2016, Troy Grady ran a poll asking guitar players to describe the way they hold a pick. I answered it, together with about 6000 players. The results didn’t surprise anyone, but the way Troy analyzed them was quite interesting.

Ways of Gripping a Pick

As stated earlier, there are seven main ways of holding a guitar pick. Here they are, sorted from the most common to the rarest.

The angle pad way of holding a pick gives the index finger more strength against the thumb. Its main downside is that it makes playing diagonaly to the strings very hard.

The far knuckle gripping method is giving the index finger even more strength to fight the pressure from the thumb. Since the pick is placed directly on the knuckle, it allows the payer to play with its angle very easily.

The pad to pad grip is angling the index finger in the best way to counter the thumb. It positions the finger in a way that puts a lot of the movement on the wrist rather than on the fingers. Sacrificing some of the accuracy the fingers have. On the other hand, if it’s good enough for EVH, who am I to criticize it?

The middle knuckle is the extreme version of the far knuckle method. It’s characterized by its stiffness, favoring control over articulation.

This is another extreme version of the pad to pad way of holding a pick. The middle finger is positioned perfectly to counter the thumb. It forces the wrist to control the position of the pick.

What to Do with the Rest of the Fingers?

Even though it may seem less important than the previous part, the way you use the “unused” fingers has a lot to do with the intensity of your grip, and even on how easy will it be for you to incorporate techniques such as hybrid picking.

The rule of thumb here is that the looser the hand, the more articulation you’ll have. On the other side, the tenser it is, the more control you have over the pick.

Curving the pinky, ring, and middle fingers is the most common way of using them for a few reasons:

The released posture is the second most common, and is the one giving your unused fingers the most freedom. It is usually characterized as having the most articulation. Releasing the pinky, ring and middle fingers often helps releasing the thumb and index finger. If you use thick guitar picks, you’ll see that they require less force to grip, and the rest of the fingers are releasing as well.

The least common posture is the fist. I was very surprised to see that at the time, because every time you see a guitar player plays an intense part, it looks like they’re holding their pick as if their life depends on it. Only years later I realized that this is unlikely what they do because the intensity of this grip does give guitar players a lot of control, but at the cost of ease of movement.

What Affects the Way You Hold The Pick?

An experienced guitar player is most likely to not change the way they hold a pick unless there is a very good reason to do so.

Some picks (especially ergonomic picks) are designed for a specific grip type and are very uncomfortable if you hold them in a different way. Tapered picks are very easy to hold in place, for example. There are types of thumb picks that can be used as a flat pick, which requires a very specific grip.

When the grip surface of a pick is aggressive enough, it can allow you to have less contact area with the pick for it to stay in place.

So How to Properly Hold a Guitar Pick?

When you think about it, our hands aren’t built to hold such a thin piece of material with the force a guitar pick often requires. When you choose a grip, make sure it lets you keep your hand relaxed and is not restricting your movement.

The way I’d advise you to hold a pick is either of the three most common (pad to side, angle pad, or far knuckle) with the rest of the finger curved or fully released.

Relieving Wrist Tension by Holding The Pick in a Different Way

If you ever feel tension in the wrist, try releasing your hand and see if the way you hold the pick is stressing your wrist. Consider trying a thicker or ergonomic pick to relieve some of the tension. Treating the pain early is crucial for preventing a guitar injury.

I hope you enjoyed this article, and that now you understand that holding your pick is too important to leave it to chance. Choose wisely, your grip will walk with you through your career and will either help you or hold you back.

If you liked this article, visit our free guitar lessons section for much other free content. See you next time!