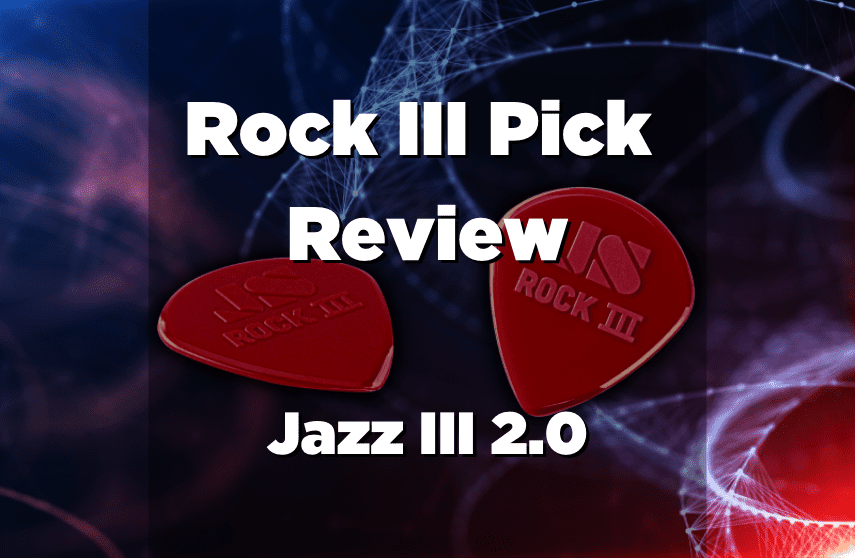 Jazz III needs no introduction, it has been around since the mid 70’s and we all know it. Now, Dunlop came up with a new design that might challenge the red devil’s dominance. Dunlop’s Rock III is based on the shape and gauge of Jazz III, but with a speed bevel at the tip. How does it affect the tone and playability? That’s what we’re going to find out.

The main difference between Rock III and Jazz III is that Rock III’s tip has a speed bevel. It’s supposed to increase its speed and help it glide more easily across the strings.

When looking at it for the first time, I’m a bit disappointed. I expected the speed bevels to be a bit more dramatic than they are. It essentially looks like a worn-out Jazz III, except it costs almost twice as much. My hope is that they’ll at least deliver consistent sound. Another thing that’s hard to miss is the difference in colors between the image shown on Dunlop’s site and the picks themselves. They’re a lot darker, which is a great thing. Just imagine yourself trying to pull one out of your pick stash full of Jazz IIIs and you’ll see why.

How Do Dunlop’s Rock III Feel?

When you hold it, it feels roughly the same as Jazz III (the regular one, not Stiffo or max-grip). The textured logo provides the perfect grip, and the thickness is 1.38mm, too. Overall, Rock III feels exactly as you’d expect it to. I feel the beveled tip reduces a lot of the string resistance, more than I expected it to. After playing with it for a while I understood that even though at first glance it may look like it, this is far from just being an overpriced worn Jazz III. This pick has a real edge over other picks, and it deserves its own place.

How Does It Sound?

Rock III’s beveled tip adds a lot of clarity and consistency to the sound. It still sounds like a Nylon pick, so it resembles the sound of Jazz III, but it plays clearer. It shines even at high gain and sounds a lot more “alive”, which was a big weakness of its ancestor. This is a big leap forward in my opinion.

How Durable Is Rock III?

It wears a lot slower than I thought it would. I don’t think they altered the material, it’s just the shape. The bevel helps it fight the strings a lot less, and glide a lot easier. Together with more surface area to spread the pressure, you got yourself a winner. I bought mine two weeks ago and it still looks, sounds, and plays as if I just got it now. By that time, I’d go through 2 or 3 of any other Nylon picks.

Rock III Price And Where To Buy Them From

The price varies between different stores. I bought mine through Strings And Beyond, where a pack of 6 cost $5.99 and a pack of 24 cost $14.99. They are also available through Dunlop’s website.

I think Rock III is a great pick, and I’m more than happy to have it in my collection. It’s relatively durable, sounds great, and plays great. You get a really good value for your money with it, even though it’s a bit pricier than other picks in that range. Nylon picks wear pretty fast, especially when they are produced at this scale (the slower you heat and inject Nylon into its mold, the higher the durability will be). But its shape helps a lot in slowing down this process.