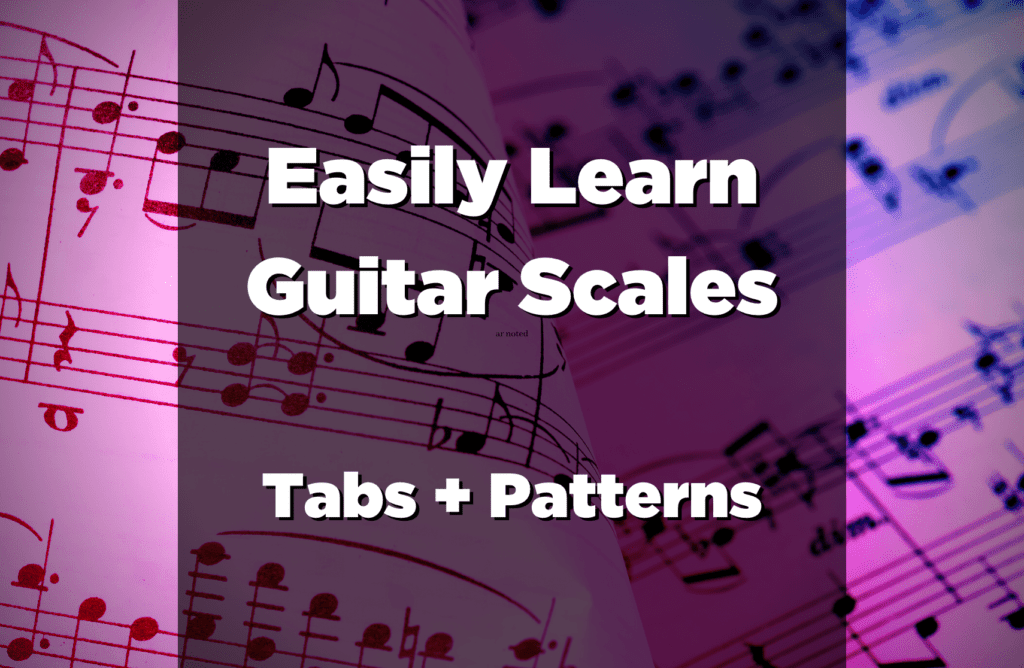 Guitar scales are a great way to learn how to play solo guitar and perfect your playing skills. You can learn how to read scales all over the internet, but most sites write it out in the most confusing ways. I know that when I was a beginner trying to learn scales I had no idea what I was looking at and it made learning scales extremely difficult. They had either a whole bunch of numbers going across the screen or a group of colors that represented the notes. It was very overwhelming and I didn’t understand any of it.

So in this lesson, I will teach you the basics of guitar scales, and when you understand it you can then move on to find some more advanced lessons on other sites. I’ll try to keep things as simple as possible so that beginners can understand. Hopefully, learn these scales quickly without any problems.

Below, the notes are written out in Tabs (Tablature), If you are still struggling with tabs, or don’t know how to read them at all, I wrote a guide about how to read guitar tabs. The best way to learn scales is to slowly play each note one at a time, with a metronome.

First, we will start with the E minor pentatonic scale. What does Pentatonic mean? The word Penta means FIVE, and Tonic means tone (of note). So the word translates into a “Five note scale”. When we say Tonic, though, we usually mean the keynote of a musical scale. Pentatonic scales only consist of five notes (Penta) but are usually written out across all six strings to make the guitar scale sound a bit more harmonic.

The notes in this first scale are E, G, A, B, and D. If you look closely you will see these notes repeat going all the way across the six strings. You can use this basic knowledge with any scale that you are learning. Because the notes repeat, you can mix and match the notes in almost every scale and play the notes in any order to make a song and it will still sound nice. Take some time to memorize these guitar scales, and after you understand how they are formed try to discover more scales to write your own music.

The Blues scale in E

This is almost the same as above, but with a few extra notes to make it sound like a blues solo. Try bending the notes in bold to give the scale more of a bluesy sound. The little arrow pointing ^ means to bend the string. Guitar scales are just one part of playing the blues, the rest comes with practice and emotion.

Next, we have the G major scale. The notes here are G, A, B, C, D, E, and F#. As you can see this major scale consists of 7 notes. This scale has all the notes in the musical alphabet, with the F note being a sharp note.

NOTE: On the guitar, the fifth fret notes on the E, A, D, and B, strings are the same as the open string above it. For example, the 6th E string’s fifth fret is an A note, which is the same as playing the 5th A string open, and the 4th D string’s fifth fret is a G note. If you don’t understand, try learning all the notes on the guitar to see which fret plays which notes. It will surely help you to better understand guitar scales.

The A Major guitar scale

There are 5 different patterns in which any major scale can be played on the guitar. Being ‘patterns’ means that you can move these shapes along the fretboard and get different major scales. Here they are:

The A Minor guitar scale

Similar to the A Major scale, but a few notes are different to make this one a Minor scale. The notes are A, B, C, D, E, F, and G (just the same notes found in the C major scale). This scale also makes for great practice in playing blues solos. Take a look:

What to Do with All These Guitar Scales?

So you practiced all the scales, and you know them by heart. GREAT. What else? What can you do with it? It’s true that guitar scales are often considered a part of guitar theory. Buy guitar scales have a practical application you can start applying to your playing right now. Now that you understand the scales, you’ll see how your improvisation is improving, allowing you to jam with others with a lot more confidense.

Now that you know the basics of guitar scales, try memorizing them to perfect your technique. You can also try playing these notes in random order to see what you can come up with and try finding chord shapes to mix and match the scales to create guitar solos. Reading about playing the guitar will help you learn the basics, but if you want to really get good, you’ll need to pick up your guitar and do several hours of hands-on practice.

Was this lesson helpful? Comment below and let us know.

Pick the Right Guitar Polish: Preserve and Protect the Finish on Your Valuable Guitar

How to Play Slide Guitar and Get a Good Tone