Attak Pik: Why Do I Love Them? – Review 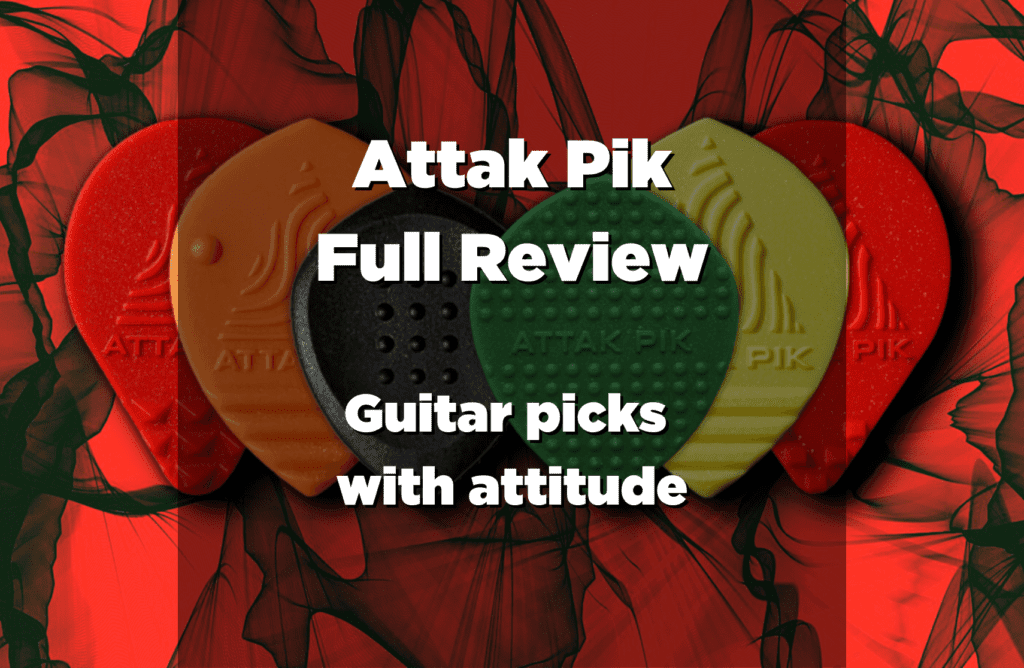 The Attak Pik range is made by Acoustik Attak, a USA-based company that specialized in guitar innovation. To be honest, I’ve never heard about Attak Pik until I saw one of their ads on Instagram, and I’m so glad I saw it. The tip of every pick is textured in a way that the attack (or the pluck, for that matter) is shaped by the texture on the tip of the pick more than anything else. Their site says that every pick in the Attak Pik line is made out of nylon. But don’t expect it to sound like any other nylon pick you have ever tried. They were also featured on my coolest guitar picks list.

A few days after I ordered the Attak, Ambush, and Blade, they announced the Blade II model. So I ordered it too, hoping they’ll get here around the same time. By the time they all arrived, they Announced 2 more designs: Stealth and Surge. I’ll update the review after I get them. In the meanwhile, here are my thoughts about Attak Pik’s Attak, Ambush, Blade, and Blade II.

Update: Just got the Surge and Stealth about two weeks ago. Had enough time to check them out and put them to a peassure test. They’re now both added to the review.

What are they made of?

All of the picks in the Attak Pik line are made out of Nylon, which is not the most durable material for picks (more on that later). That being said, I think it is the best choice for them as it offers the perfect flexibility for what they are made to do. Not to forget that Nylon is usually cheaper to process, making them very cost-effective.

The site state that they are very durable, which I highly doubted at first. Even just strumming chords with a thin nylon pick would have some sort of wear after a few hours. Let alone with this type of texture on the tip. To my surprise, I haven’t seen any sign of early wear or anything, other than the initial “break-in” they have after a few minutes of playing. I’m deeply impressed. I expect them to last a really long time, as I have really abused them over the last couple of weeks. Just for the sake of comparison, I’d probably go through a 2-3 Jazz IIIs by now.

What’s in the the Attak Pik lineup?

Even though they are all made of the same material, with roughly the same shape, every one of these picks is different. Nonetheless, they can be divided into three groups: Attak and Ambush, Blade and Blade II, and Stealth and Surge.

The Attak’s most notable quality is its percussive effect on the attack. It isn’t punchy nor it is round, but more of a 3-4 rapid punchy attacks in rapid succession. Very similar to a very fast delay applied only on the beginning of each note, but without the phasing issues, you may face while trying to go for a similar effect with a pedal. It has a very notable mid presence that can really help with getting that “going forward” feel.

Attak Pik’s Ambush is very similar to the Attak, but has a punchier attack and a lot more presence in the high-mids and high frequencies. The first strike is a lot louder than the following ones, making the effect less aggressive, but more present. I feel like it’s a bit faster too.

I think that this is the most useful pick out of the four (Update: this part was written before I tried the Stealth and Surge.). The only one I’ll feel comfortable strumming, playing lead, and playing the bass with. It’s got a short burst of brightness with every pluck that I just love because it isn’t overpowering. And the closer to the tip you hold it, the more control you have of that burst.

Very similar to the Blade in character, but more focused on the mids than on the high-mids and high frequencies. I feel like it has more high presence than the Blade on the lower strings (or bass strings for that matter). It creates a great balance between all of the strings. Providing extra mids to the higher strings and a high shelf-like attack to the lower ones.

Looks boring at first glance, but don’t let the texture-less appearance fool you. This pick has tons of character. The sharp tip makes the attack very clear, but the angle makes it fast too. In fact, it’s the fastest pick they make. And if you hold it backward, going through the strings feels like slicing a banana with a lightsaber.

When I saw it for the first time, I asked myself if the design was inspired by chickenpox. It probably wasn’t but I didn’t expect to like it too much. And boy was I wrong. The little dots add a lot of high frequencies, and the fact that it’s so thick (compared to the first four picks they released), makes it very clear that it (and Stealth) was designed for an electric guitar rather than for an acoustic. Another thing is that you can control the level of its effect by angling it differently. The last thing is that like the Stealth, holding this pick backward also introduces some interesting effects and enhanced speed.

How do they sound?

Every pick in Attak Pik’s lineup is adding a different type of effect to the guitar’s tone. Some add punch and some modify the attack in different ways. One thing they all have in common is that they are super loud (Update: this was written before getting Surge and Stealth, which are not that loud at all. At least not more than any other pick you have now).

The fact that these picks are so unique makes them a lot harder to understand before you buy them. So the guys at Attak Pik recorded and uploaded sound demos to a page full of samples. They are currently showcasing every pick they have on a clean electric, an acoustic, and a bass. Could be useful to hear them on higher gain settings too (even though it isn’t what they are designed for). You can check it out here.

The Ambush is a toned-down (but punchier) version of the Attak, and they are both adding a super unique percussive texture to your strumming. I get the feeling that they were designed for an acoustic, but they work very well on a clean electric too. I didn’t really like how any of them behaved in heavier settings. But I can’t hold it against them, just as I wouldn’t hold the way a wah pedal sounds with a classical nylon guitar against the pedal maker. It wasn’t supposed to work.

Blade and Blade II resemble each other, although they have some subtle differences that make them very distinguished from one another. The Blade II is a lot stiffer than the original Blade, making it a superior choice for lead. On the other hand, The original Blade is a lot more versatile and will suit both strumming chords and playing high gain riffs and solos. As a matter of fact, the Blade duo are adding a lot of brightness to the attack, without compromising its sharpness. It makes them a great choice for a curveball bass pick that will cut through a mix a lot easier.

Light on the lows and mids, with a comfortable presence in the highs and high mids. Great for sweeping and playing fast riffs. Being made out of Nylon, you might expect it to sound like a Jazz III, but you’ll be mistaken. The Stealth is both Sharper and molded in a different technique than the Jazz III. These facts, in my opinion, make it superior.

These little dots are not slowing the pick down, but still, add sharp high-frequency bursts with every pluck. If you’ll tone them down using a filter, you get super interesting results. When adding some extra drive after the filter, It becomes super aggressive, like playing a 6 string tractor. And who wouldn’t want to at least try that?

How do they feel?

It took me a lot of time to get used to them. They are (Attak, Ambush, Blade, and Blade II) a lot bigger than I expected when I ordered them. The markings on the tip make them fight the strings on every stroke. More than any other pick I’ve ever tried. Especially the Attak and the Ambush. At least until they broke in properly. Even after I got used to them and they got used to being played, it wasn’t smooth sailing.

The Stealth is the easiest one to get used to, even though I’d love a thicker version of it. The Surge, on the other hand, is a great introductory pick to the rest of AttakPik’s line, as it is just on the border between a normal pick and a heavily textured one.

Like in most cases, at Attak Pik too, the more picks you buy – the less you’ll pay per pick. They start from $5.99 for a pack of 3 and go up to $74.99 for a pack of 60. If you are still not sure about them, the safest route is to get “The Arsenal”. This is a pack containing one of each pick (6 picks total) for $10.99. This is, by far, the most cost-effective tone experiment you’ll ever do. And I can’t recommend them enough.

Where to buy them from

I usually try to encourage people to buy boutique picks directly from the maker. I can’t really call these boutique picks, but luckily, this time I don’t have to. All of the picks made by Attak Pik are available on their website and there only.

A lot of pick makers do this, I don’t really know why it’s so widespread among them – but I love it. For every purchase from Attak Pik, they donate $1 to SweetRelief, which supports musicians affected by COVID-19.

I love them, but I’d never gig with the Attak or the Ambush unless the texture they’re adding is crucial to one of the songs. I can definitely see myself using any of the Blades on bass or as a lead. Blade II is one of my favorite bass picks ever since I tried it. I think they are phenomenal tools to have in the studio, as each of them is useful in its own way. Surge is both interesting and consistent, so after a few hours of practicing you can definitely gig with it, knowing it’ll do exactly what you expect it to. Stealth is a whole other thing. I find myself reaching out to get it almost every time I practice. For me, it’s an enhanced version of the basic pick design we have all used for decades.

In terms of value for money, it’s very rare to find such a unique, yet useful set of tools that cost as little as these do. I’d still think it’s a great deal if they would cost twice as much as they do.

This is NOT a paid review. It was written based on my own experience playing the picks I purchased and based on that only. The guys from Attak Pik didn’t send me the picks for free.

They sound unique, but recognizable enough so it's still a familiar pleasant sound. It felt a bit awkward at the beginning, but I got used to it and it started to flow a bit more. They are durable (more than you think), grippy, and a lot cheaper than they should be.