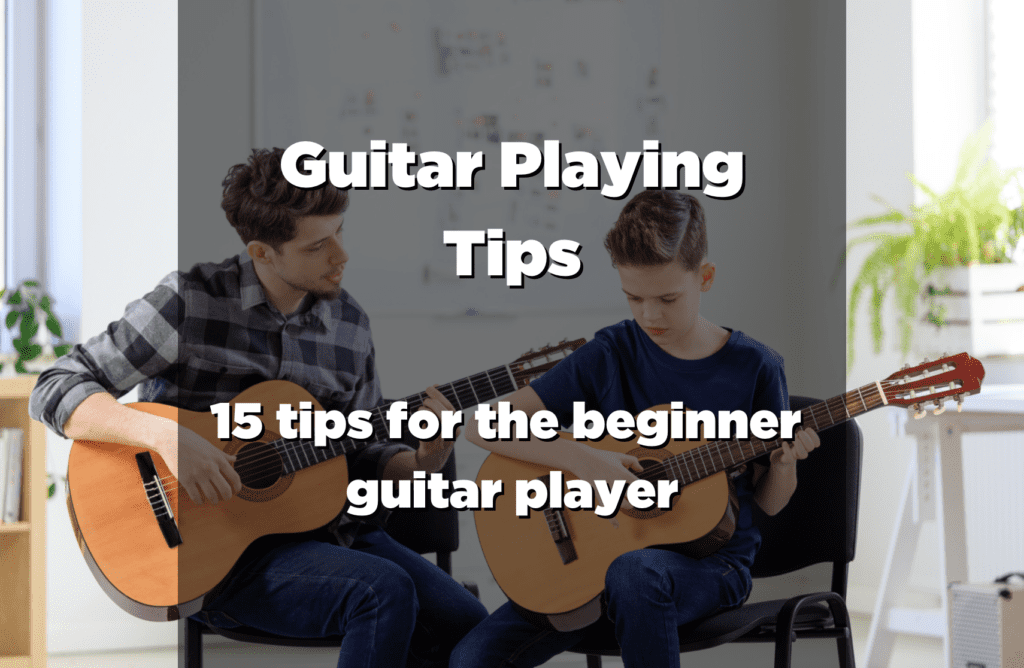 I have read that anyone can learn to play guitar, and this is true. For some players, it comes more naturally than to others. But no matter to which of the two groups you belong, these guitar playing tips will make your beginning a lot easier. Music games like Guitar Hero teach rhythm and are good in exposing the guitar player to be, to the feeling of being in sync with the flow of a song. Although, actually playing guitar is very different from these kinds of games. I think that some people are born with a predisposition to music, and have a faster ability to absorb music, and technique. While others learn to play at a slower pace.

I play the guitar for as long as I can remember, and I am basically self-taught. I’ve learned some very valuable lessons from the trial and error approach, that I first used when trying to learn how to play guitar. I have taught these guitar playing tips to others, who have learned to play guitar, and have continued to improve and play on their own.

Here are some very basic tips and ideas that can help almost anyone learn how to play guitar.

First of all, think simple. No one can just pick up a real guitar and start playing it. It takes time, determination, and patience. If someone has the mindset that they can just pick up a guitar, and play it. This person will give up or become frustrated.

2. Don’t invest too much money

Buy a cheap guitar, I would suggest an acoustic guitar, which in some cases is cheaper. Or at least learn a bit of guitar negotiation if you’re buying an expensive one. If your first guitar is expensive, it can in a way be a little more intimidating. Let’s say it would be more stressful on the person learning to play, in the knowledge that they had paid so much for the guitar, and they couldn’t play it right away. The beginner wouldn’t feel the love for playing because of feeling pushed to learn how to play it. Here’s a guide I wore with some recommendations to buy your first guitar.

3. Light gauge strings are easier to start with

Put light gauge strings on the guitar. This would make it easier to get out a good clear sound quicker, and easier when learning to press the strings.

Choose a pick that’s good for strumming. No one needs a pick designed for lead when you learn your first song.

6. Always play with a tuned guitar

Learn how to tune a guitar, and make the best effort to always play with a properly tuned guitar. You don’t want to get used to the sound of an out-of-tune guitar. I’d go even a step further and choose a tuner that fits the way you plan on practicing, just to make it more seamless.

7. Get a reliable and structured source of information

Obtain a simple and easy guitar book with basic chords, or have someone that knows how to play, show you the basic chords.

Learn how to press the strings to make the appropriate sound by arching the fingers. It sounds simple, but it is worth the extra time to get it right. It will be a lot harder to fix a bad habit later on.

9. Start with a simple song

If possible, learn a two-chord song. I would suggest learning the G chord and D chord. There are thousands of songs that use these two basic chords.

10. Practice with a metronome

There are countless guitar players who can barely play standing up because they used to practice sitting down. This is one of these bad habits you want to avoid because fixing it could take years. Just buy a guitar strap and learn to wear it properly. Get some strap locks while you’re at it.

12. Don’t limit yourself to one technique

Having the ability to play both with a pick and play fingerstyle from the beginning is a great advantage and will allow you to play any song. Other important techniques to learn are: Alternate Picking, Hybrid Picking, Economy Picking, and later on, Sweep Picking.

Important techniques to learn are Alternate Picking, Hybrid Picking, Economy Picking, and later on, Sweep Picking. These are great skills to have in your arsenal. And the majority of them are a lot easier to learn in the beginning than later on after you got used to playing in a certain way.

14. Record and listen yourself often

It’s harder to hear your mistakes while playing, a recording is very useful in finding where to focus in your practice routine. Here are 2 guides for recording:

Many short practices are more valuable than an extremely long session every few days. Check out my guide for a recommended guitar practice routine for more information and advice.

These guitar playing tips won’t make you the new Hendrix, but they’ll make you learn the first couple of songs a lot faster. It’ll also help you build better habits, so you won’t have to “unlearn” them after you got used to playing in a certain way.

The hardest part for most beginners is pressing on the strings, to get the sound of the chords by raising the fingers in an arch. take your time in finding a good posture, and don’t rush it. Anything hurried or rushed causes frustration, and stops the natural flow of the music. And this is very needed in order to become a good guitar player.

If you have other guitar playing tips that I didn’t think about, feel free to post them in the comments, I’d love to hear what you got to say!